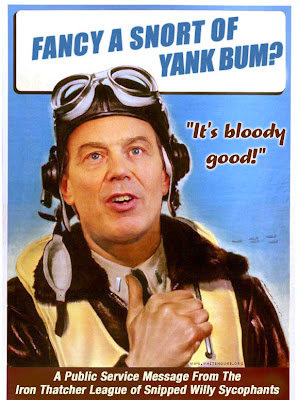 Then British PM Tony Blair was told months before the fact that invading Iraq would violate international law and the UN Charter. He got that warning, in writing, from his most senior legal adviser, Lord Goldsmith. How did Blair react? According to The Guardian, he took away Goldsmith's place at the cabinet table:

Lord Goldsmith, then attorney general, issued the warning in an uncompromising letter in July 2002, eight months before the invasion. It was becoming clear in government circles that Blair had had secret meetings with George Bush at which the US president was pressing Britain hard to join him in a war to change the regime in Baghdad.

The hitherto unpublished letter has been given to the Chilcot inquiry on the Iraq war. Goldsmith is due to be questioned about it early in the new year with other senior government lawyers who questioned the legality of an invasion at the time. Goldsmith warned Blair that "as things stand you obviously cannot do it [invade Iraq]", a source familiar with the dispute told the Guardian.

Increasingly concerned that Blair was ignoring his earlier advice that regime change was "not a legal basis for military action", on 29 July 2002 Goldsmith wrote to Blair on what the Mail on Sunday described as "a single side of A4 headed notepaper".

The typed letter was addressed by hand, "Dear Tony", and signed by hand, "Yours, Peter". In the letter, whose existence was confirmed by other sources, Goldsmith warned that the UN charter permitted "military intervention on the basis of self-defence", but it did not apply here because Britain was not under threat from Iraq; that the UN allowed "humanitarian intervention" in some circumstances, but such was not the case in Iraq; and that it would be very difficult to rely on earlier UN resolutions approving the use of force against Saddam.

Bush is all but immune from prosecution but Blair isn't. Shouldn't somebody be putting this man on trial for an illegal war that has claimed the lives of tens of thousands of innocent Iraqis?
Posted by The Mound of Sound at 8:44 AM

Tony Blair: US war criminal poodle, that is.