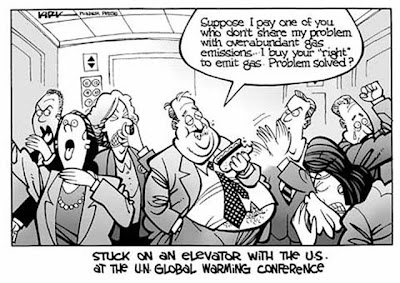 Caught a documentary on CBC last night about "Carbon Hunters." These are young entrepreneurs who scour the world looking for ways to identify eco-friendly projects that might qualify for lucrative carbon credits.

The show gave a few examples. Prairie farmers who don't plough the soil anymore but use a different tilling technique that doesn't release as much carbon from the soil. Bingo, carbon credits! Or a Texas oilman who got his hands on 2-million acres of Amazonian rainforest. Bingo, ginormous carbon credits. Or a village in India where the locals gather up their cattle poop, mix it up in a tank, draw off the methane emitted and pipe that through to their homes for cooking fuel. You guessed it, carbon credits.

Here's the deal. Do we grant these annual carbon credits in perpetuity - forever and ever, amen? For the prairie farmers, I could see giving them credits for a few years, at least long enough to give them some incentive to shoulder the cost of new farm machinery, but forever? No way. And what about all those cattle in India? Sure you've collected all the crap and beautified your neighbourhood but you were going to burn that poop anyway and, besides, what about all the methane those cows fart out all day long that you don't capture? That's the real problem and you're not doing one damned thing about it. In fact, you might find it worthwhile to start aquiring more cows because they're now genuine cash cows.

Okay, where are my carbon credits? I was fixing to breed myself a herd of cattle but no, in the interests of the environment and to fight global warming, I've decided to deny myself those cattle. So, I'm saving the world not only from their poop but their farts to boot (no, don't try to visualize that at home).

This is a scam with all the efficacy of paying farmers not to grow stuff. You wind up with the carbon credit scammers raking in bucks to provide political cover for GHG-emitting industries.

I think Monbiot was right. This carbon trading business is really just like moving food around your plate with a fork.

“Carbon trading was an idea with potential but the danger is that
it so rapidly develops into a scam.”
- James Lovelock
Posted by The Mound of Sound at 7:54 AM

I'm going to refrain from paving over my yard and chopping down all of my trees. How much $ do I get?

The C&T idea is too prone to flim-flam and abuse. Interesting to note that it is now the favoured "solution" of NDP, LPC and CPC.

Well JB I think they should at least give you that damned mini-van you've been longing for.

Let's see. You can only cut down the forest once but you're going to log carbon credits each and every year for ever and ever, amen? It's as though no one can think through the long-term ramifications of this made-to-be exploited swindle. I agree with you. Any party, including my own, that advocates this sham isn't sincere nor should it be trusted.