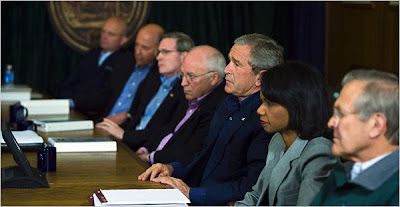 December, 2001. The Commander in Chief of the most militarily powerful nation on earth had the evil mastermind who had initiated the attack on America on 9/11 holed up in a cave in the mountains of Afghanistan - and let him go to fight another day.

The US Senate has released a report that finds Osama bin Laden was 'unquestionably' within the reach of US troops in that December, hiding in the Tora Bora caves. From The Guardian:

The report asserts that the failure to kill or capture Bin Laden when he was at his most vulnerable, in December 2001, has had lasting consequences beyond the fate of one man. The al-Qaida leader's escape laid the foundation for today's reinvigorated Afghan insurgency and inflamed the internal strife now endangering Pakistan, it says.

In other words, Bush and his puppeteer Cheney are directly responsible for allowing bin Laden to slip through America's fingers just as they're responsible for doing al Qaeda's bidding for the rest of their time in office.

bin Laden survived and al Qaeda morphed into a decentralized Hydra stretching from north-east Africa to Indonesia and north into China and Russia as well as Europe. Then Bush/Blair/Cheney gave al Qaeda the shot in the arm it so desperately needed by their ill-conceived decision to wage an unnecessary war in Iraq.

These neo-conservative punks could never overcome their delusions of grandeur and omnipotence that led them to blunder everything from global terrorism to the global economy and, in the process, positioned America for inevitable decline. Imagine - running historic deficits, waging two wars and cutting taxes for the rich (which had to be funded out of foreign borrowings). Blue collar and white collar stagnation accompanied by a massive transfer of notional wealth to the oligarchy.

Bush/Cheney inflicted more lasting harm on America than bin Laden could ever imagine in his wildest fantasies. Then again, they didn't do the rest of the world any favours either.

Those of us who live with the scourge of Stephen Harper would do well never to forget what these far-rightwing ideologues can do to a country.
Posted by The Mound of Sound at 7:34 AM

They probably let him go deliberately "to fight another day" because then they would not have had an excuse to go into Iraq & do all their "nasties" there that they've done - & continue to do. Also, they would have had to leave Afghanistan as well because it would have been perceived as "Mission Accomplished" & they had/have other things on their minds there as well.

I would also add Condi Rice to that short list of yours. The one Peter Mackay appeared to be so enamoured of for a time.

You are right: we must not forget what they did to their country because we must be always on guard for what Harper wants to do to us. Unfortunately our wimpy msm just does Con "talking points" & so the truth never really gets out there in to the public mind.

Interesting point Penlan. I too wondered whether it wasn't useful to Bush to keep Afghanistan churning over to inflate his "War on Terror" nonsense. I think that would be treasonous if it could be proven but I'm sure there'll be no smoking gun to be found.

Someday someone will write a definitive analysis on how Bush/Cheney corporatized warfare by giving outfits like Halliburton, KBR and Blackwater nearly as big a role as the armed forces themselves.

"Someday someone will write a definitive analysis on how Bush/Cheney corporatized warfare by giving outfits like Halliburton, KBR and Blackwater nearly as big a role as the armed forces themselves."

I read somewhere, recently, that we, too, have contracted out to these same sort of companies in Afghanistan. It wouldn't surprise me if one of them was Blackwater which has since changed it's name.

MoS: well, you beat me to it - my post on this is scheduled for tomorrow PM ... still, we've known this for quite a while.

That was the first fundamental, incompetent mistake on the part of Bush Co. - dismissing this doctrine, despite the fact that the creator of this (successful) doctrine was in their own administration.

The second was to fail to see the obvious: that if given the chance, bin Laden would head to Pakistan to safety.

Then again - they were too busy preparing for Iraq and thus never wanted to commit a massive force in Afghanistan, consequentl opting to keep the bulk of their troops available for the upcoming Iraq war.

And the rest, as they say, would be history ...

Sadly I don't see this report getting any traction at this late stage. It's only confirming what most sane people understood in 2001, 2002 at the latest.

The Bush/Cheney/Rumsfeld/Wolfowitz ideology played straight into bin Laden's hand. It's no exaggeration to say that their blundering was the best thing that ever happened to al Qaeda and the Islamist/Salafist movement generally.