Dr. Hedges Diagnoses the Disease That Is Neoliberal Globalism. 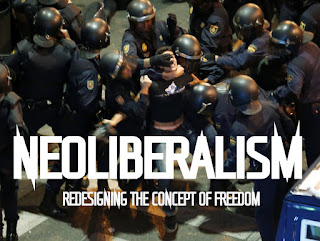 Chris Hedges writes that, in order to fully grasp the disease of neoliberalism, it helps to take stock of the symptoms.

The disease of globalized corporate capitalism has the same effects across the planet. It weakens or destroys democratic institutions, making them subservient to corporate and oligarchic power. It forces domestic governments to give up control over their economies, which operate under policies dictated by global corporations, banks, the World Trade Organization and the International Monetary Fund. It casts aside hundreds of millions of workers now classified as “redundant” or “surplus” labor. It disempowers underpaid and unprotected workers, many toiling in global sweatshops, keeping them cowed, anxious and compliant. It financializes the economy, creating predatory global institutions that extract money from individuals, institutions and states through punishing forms of debt peonage. It shuts down genuine debate on corporate-owned media platforms, especially in regard to vast income disparities and social inequality. And the destruction empowers proto-fascist movements and governments.
...

There are within America’s corporate power structures individuals, parties and groups that find the hysterical, imbecilic and irrational rants of demagogues such as Trump repugnant. They seek a return to the polished mendacity of politicians such as Hillary Clinton and Barack Obama. They hope to promote the interests of global capitalism by maintaining the fiction of a functioning democracy and an open society. These “moderates” or “liberals,” however, are also the architects of the global corporate pillage. They created the political vacuum that the demagogues and proto-fascist movements have filled. They blind themselves to their own complicity.
...

Once Trump’s base begins to abandon him—the repression in Turkey under President Recep Tayyip Erdoğan is a good example of what will happen—the political landscape will turn very ugly. Trump and his allies, in a desperate bid to cling to power, will openly stoke hate crimes and violence against Muslims, undocumented workers, African-Americans, progressives, intellectuals, feminists and dissidents. He and his allies on the “alt-right” and the Christian right will move to silence all organs of dissent, including corporate media outlets fighting to restore the patina of civility that is the window dressing to corporate pillage. They will harness the power of the nation’s substantial internal security apparatus to crush public protests and to jail opponents, even those who are part of the faux resistance.

While the game will always be weighted against the majority, Mound, one solution would be to impose the so-called Tobin tax, which would see all financial transactions taxed at a fraction of one per cent. I have yet to read a convincing argument against its simple elegance.


I'm not sure that horse hasn't already left the barn, Lorne. The most recent stuff I read from the IMF appeared to hint at wealth redistribution or what the rich would call confiscatory taxation.