The White On the March 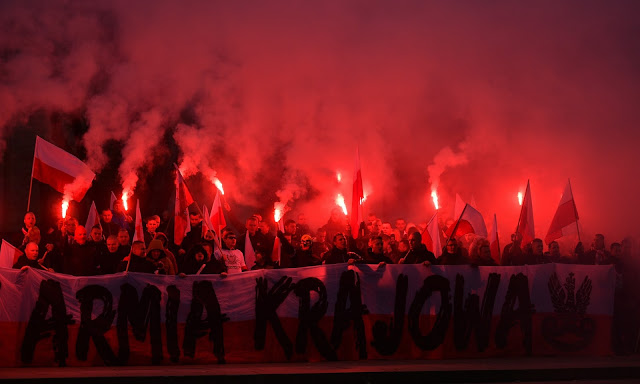 An estimated 60,000 white supremacists took part in a torchlight parade through the streets of Warsaw this weekend.

Police estimated 60,000 people took part in Saturday’s event, in what experts say was one of the biggest gathering of far-right activists in Europe in recent years.

Demonstrators with faces covered chanted “Pure Poland, white Poland!” and “Refugees get out!”. A banner hung over a bridge that read: “Pray for Islamic Holocaust.”

The march organised by far-right groups in Poland is an annual event originally to mark Poland’s independence in 1918. But according to Nick Lowles, from UK anti-extremism group Hope Not Hate, it has become an important rallying point for international far-right groups.

Many carried the national white-and-red flag while others held banners depicting a falanga, a far-right symbol dating to the 1930s. A demonstrator interviewed by state television TVP said he was on the march to “remove Jewry from power”.

“It was a beautiful sight,” the interior minister, Mariusz Błaszczak, said. “We are proud that so many Poles have decided to take part in a celebration connected to the Independence Day holiday.”

WTF? Don't they teach history in Poland? Hitler considered Poles subhuman, and killed 5 million of them, including 3 million Polish Jews.

To see 60,000 Polish neo-Nazis in the streets of Warsaw is shocking. What the hell are they complaining about? The population is 95% ethnically Polish (i.e. white) and only 3% list a religion other than Roman Catholicism. Unbelievable.

It seems to be anchored in xenophobia, a fear of migrants from the Middle East or Africa. That, and the fact that a good many of them never shed their authoritarian instincts from the Warsaw Pact days.

Warsaw Pact or not, don't these idiots have grandparents? I thought Solidarity had managed to break the grip of 50 years of authoritarian control by outsiders. Apparently not. Poles seem to have internalized it.

"While there is no shortage of British racism towards familiar scapegoats such as Muslims and nonwhite immigrants, two of the most notable post-Brexit events focused instead on immigrants from a predominantly white and Christian European country: Poland. ...

"Anti-Polish sentiment is far from new to Britain. According to figures obtained by the Guardian, in 2013, British police officers arrested at least 585 people for hate crimes against Polish people – a figure that may be a large understatement, as the newspaper was only able to get numbers from 26 of the country's 46 police forces. A survey from 2014 found that 81 percent of Polish people living in Britain had been subjected to verbal or physical abuse or knew another Polish person who had who had."

Wait a minute. Let's try and see if we can get in goosestep with the times.

"Britain First deputy leader Jayda Fransen told BBC Trending that post-Brexit, all European immigrants who are already in the UK should be allowed to stay, as long as they aren't criminals or Muslims."

That's better. You just have to make sure the invitations are sent to the right guys and then control the mic at the tribal council meetings. But then of course, there's always something yet more to be considered in framing the historical perspective.

"Poland plans to bar Ukrainians with 'anti-Polish views,' its foreign minister [ Witold Waszczykowski] said on Thursday, emphasizing the nationalist credentials of his ruling party that often talks of the 'historic wrongs' inflicted on Poles by their neighbors. ...

"Poland last year passed a resolution that declared the World War Two-era killing of tens of thousands of Poles by units in the Ukrainian Insurgent Army (UPA) 'genocide.' Ukraine rejects that label, saying the killings were tragic and calling for reconciliation and forgiveness.

"Waszczykowski said Poland’s sympathy for Ukraine’s struggles with Russia must not push 'historical issues' into the background."

No problem. Nothing that a good dose of Dr. Justin's Post-Nationalism Wonder Tonic shouldn't be able to clear up, wouldn't you think?.

Cap, you are confusing two different issues - Polish Nationalism and Nationalsozialismus, i.e., German Nationalism. Nationalism movements can often be hijacked (as it was the case with Nazism) to project superiority of one volk over another. But in case of Poland, it is mostly opposition to the agenda of globalist elite. In any case, you will NOT find a single swastika in Poland.

In a country where you can be jailed for displaying a swastika, it comes as no surprise that you don't see them. But when Poles call for the expulsion of religious minorities, wear brown shirts and armbands, make stiff-arm salutes and carry red flags with a white circle and a black cross in them, that my friend, is Nazism.

You are spewing misinformation, Cap.
Poles call for the preservation of their religious and non-religious societal fabric NOT for "the expulsion of religious minorities." Various churches, and even Muslim Tatars, are living currently in peace in Poland. You, and countless other clueless folks, who are living in a mongrel Canadian society, have no idea what traditions of 1000+ years could mean to other people. To people of Poland, Hungary, Czech rep., Germany, etc., etc.
Finally, those idiots who "wear brown shirts and armbands" have as much in common with Polish mainstream movement as thugs from antifa with liberal movements in the West.