Razor Wire is for Prisons and Concentration Camps 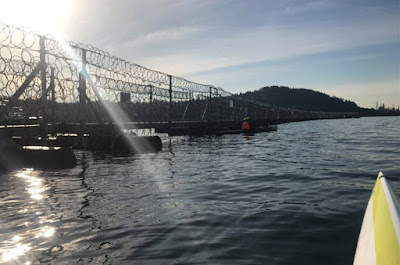 This is the face of Kinder-Morgan that Trudeau's favourite company shows to British Columbians. A floating razor wire fence around its Burrard Inlet dock facility. That's the American company's way of telling British Columbians who's in charge on our waters.

It sure lets you know what side of the fence you're on and just who is on the other side. We're on the outside. Kinder-Morgan and Justin Trudeau, they're on the inside.

We know where we stand. Trudeau's resource minister, Jim Carr, made that plain when he suggested that his government might call the army in to deal with pipeline protesters. Nobody believed the lying weasel when, in the face of the predictable public outrage, Carr apologized and said he didn't mean to threaten pipeline protesters.

Leave it to Dogwood's Kai Nagata to refresh our memories of Justin Trudeau's perfidy.

During his election campaign Trudeau promised ad nauseum that “governments grant permits, but only communities can give permission.” He was talking, of course, about pipelines. But soon after winning power, his position shifted to “Father knows best”.

By signing on to this desperate scheme, Trudeau put the lie to his own election promises and ignored the explicit lack of consent from First Nations communities disproportionately affected by pipeline construction, oil spills and climate risk.

This week the women of the Secwepemcul’ecw Assembly vowed to shut down any “Man Camps” Kinder Morgan tries to build in their vast North Thompson territory. As the Secwepemc declaration notes, a growing body of research is finding links between remote work camps and violence against women.

Farther south is the Nlaka’pamux village of Coldwater, whose leaders were barred from hiring lawyers when the first pipeline came through in 1952. The government handed over a lump-sum payment of $1,200 and told them to sign. The people have lived with an oil pipeline hissing over their water aquifer ever since. They don’t want to triple that risk.

Nor do the Tsleil-Waututh in Burrard Inlet, who have coaxed healthy, edible clams and other sea life to grow again in a waterway hurt for decades by industrial pollution. Or their neighbours the Squamish, who are reviving their language – a language born thousands of years ago from the very landscapes and ecosystems that would be obliterated by an oil tanker spill.

Days before Trudeau gave Kinder Morgan the green light, Tsleil-Waututh leaders flew to Ottawa to deliver, in person, their “informed withholding of consent”. What they didn’t know is the federal government was already setting up a website to announce the Kinder Morgan approval, before the leaders’ plane even landed.

What kind of self-professed feminist decides that “no” really means “yes”? In Justin Trudeau’s case, a Prime Minister who also fought to preserve discrimination against women in the Indian Act, and still refuses to provide equal health care or education funding for Indigenous children.

That ugly 'fence' reminds us of the totalitarian past and is a harbinger for a future when the inequality of today has morphed into a hopelessly dystopian gated-community (gated-everything) future.

It is an escalation of the non-violent struggle into something else entirely.

They are inviting a violent response. (Not from old folks like me, but younger people have so much more skin-in-the-game.)
It is going to get ugly. Sunny ways indeed.


I too have the sense that this sort of thing is a provocation, NPoV, that invites a violent response. What is razor wire intended for but to threaten people with genuine bodily harm. I'm surprised the bastards didn't electrify it, assuming they haven't, yet at least.

Like any wall the imagery is powerful. It delineates those on one side from those on the other. Justin has chosen his side. Let's see to it he lives to rue the day. I dream of a Liberal-free British Columbia in 2019. Oh, to dream.

No amount of emoting that Trudeau does in his apology tours can erase the reality of the real things he stands for, Mound. Barbed wire will always trump tears as a potent, unsettling symbol.

Kinder morgan do not own the sea bed so how can they fence off what they do not own?
Other than a few exceptions anyone owning land on the waterfront only does so to the high tide mark!


Razor wire is indeed a potent symbol of Trudeau's attitude toward my province and our coast, Lorne. As NPoV stated it's a provocation, an escalation of a non-violent but determined protest and an invitation to violence.

.. right now CBC is gushing, so to speak.. over the oil patch rebounding in Alberta. The current reports all center on the Duvernay Formation which essentially covers Alberta. And in this respect is about horizontal fracking.. with 'oil' (North Sea Brent or WTI) flirting with $60

Strangely, nobody is 'flirting' with where all the fracking waste will get tucked away for the miraculous 90 year remedy.. so's the buffalo can roam at will and the mighty politicians can do shooters of the miraculous waters. So whither the storage ponds Batman, riddle me that. If Alberta competes with beautiful British Columbia in a 'nation building' frack-the-land funfair, where will the oil go (pipeline) where will thentoxic waste go? (earthen dams on injected into thenesrth) & which direction will they leak & seep ?

"The National Energy Board issued an order Thursday saying Kinder Morgan Canada's Trans Mountain pipeline expansion is exempt from having to comply with two sections of bylaws in Burnaby, B.C., that were standing in the way of the $7.4-billion project.

The NEB order, which comes three days after the regulator heard the case in Calgary, says the company is not required to comply with two sections of the city's bylaws — which required the company to get preliminary plan approvals and tree-cutting permits — as it prepares to begin construction in the area."

Great.. Thanks for sharing an informative blog.
Razor Wire Manufacturer