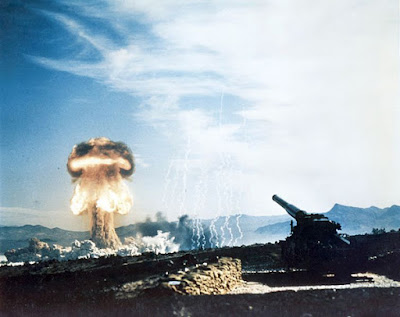 It gave some people pause when president-elect Donald Trump asked his advisors what was the use of having nuclear weapons "if I can't use them?"

Well, what Donald wants, Donald almost always gets, and that holds true for America's nuclear arsenal. Donald Trump's personal Pentagon is focusing on getting the Commander in Chief a new line of more user friendly nuclear warheads.

US war planners and weapons manufacturers have set out to make that arsenal more “usable” in order to give the president additional nuclear “options” on any future battlefield. (If you’re not already feeling a little tingle of anxiety at this point, you should be.) While it’s claimed that this will make such assaults less likely, it’s all too easy to imagine how such new armaments and launch plans could actually increase the risk of an early resort to nuclear weaponry in a moment of conflict, followed by calamitous escalation.
...

[Trump] and his advisers, it seems, want nukes that can be employed at any potential level of great-power conflict or brandished as the apocalyptic equivalent of a giant club to intimidate lesser rivals.

Making the US arsenal more usable requires two kinds of changes in nuclear policy: altering existing doctrine to eliminate conceptional restraints on how such weapons may be deployed in wartime and authorizing the development and production of new generations of nuclear munitions capable, among other things, of tactical battlefield strikes. All of this is expected to be incorporated into the administration’s first nuclear posture review (NPR), to be released by the end of this year or early in 2018.

For decades the focus of the Pentagon was on developing precision-guided conventional weapons that would reduce the need to depend on nuclear force. The idea was that modern conventional weapons could achieve the same political outcomes without either side having to cross that nasty old nuclear threshold.

Trump, it seems, likes the big mushroom cloud but not the idea that it should be just a defensive weapon, a deterrent. He'd like to toss a few around, shake things up.
...

As the document pointed out, it had once been American policy to contemplate using nuclear weapons against Soviet tank formations, for example, in a major European conflict (a situation in which the USSR was believed to possess an advantage in conventional, non-nuclear forces). By 2010, of course, those days were long gone, as was the Soviet Union. Washington, as the [Obama] NPR noted, now possessed an overwhelming advantage in conventional weaponry as well. “Accordingly,” it concluded, “the United States will continue to strengthen conventional capabilities and reduce the role of nuclear weapons in deterring non-nuclear attacks.”
...

The Trumpian NPR will certainly promote new nuclear-weapons systems that are billed as providing future chief executives with a greater “range” of strike options. In particular, the administration is thought to favor the acquisition of “low-yield tactical nuclear munitions” and yet more delivery systems to go with them, including air- and ground-launched cruise missiles. The argument will predictably be made that munitions of this sort are needed to match Russian advances in the field.

Under consideration, according to those with inside knowledge, is the development of the sort of tactical munitions that could, say, wipe out a major port or military installation, rather than a whole city, Hiroshima-style. As one anonymous government official put it to Politico, “This capability is very warranted.” Another added, “The [NPR] has to credibly ask the military what they need to deter enemies” and whether current weapons are “going to be useful in all the scenarios we see.”

The era of the Mega-Cruise Missile.

Russia has already deployed ultra-long range cruise missiles. The air launched variant is thought capable of reaching Washington from outside Canada's northern airspace. Of course if you can reach Washington you can hit any number of key American cities, including New York. Now the Pentagon wants to field a similar weapon.

A typical delivery system for such future nukes likely to receive expedited approval is the long-range standoff weapon (LRSO), an advanced, stealthy air-launched cruise missile intended to be carried by B-2 bombers, their older cousins the B-52s, or the future B-21. As currently envisioned, the LRSO will be capable of carrying either a nuclear or a conventional warhead. In August, the Air Force awarded both Raytheon and Lockheed Martin $900 million for initial design work on prototypes of that delivery system, with one of them likely to be chosen for full-scale development, an undertaking expected to cost many billions of dollars.

Critics of the proposed missile, including former secretary of defense William Perry, argue that the United States already possesses more than enough nuclear firepower to deter enemy attacks without it. In addition, as he points out, if the LRSO were to be launched with a conventional warhead in the early stages of a conflict, an adversary might assume it was under nuclear attack and retaliate accordingly, igniting an escalatory spiral leading to all-out thermonuclear war. Proponents, however, swear that “older” cruise missiles must be replaced in order to give the president more flexibility with such weaponry, a rationale Trump and his advisers are sure to embrace.

It's a bit unnerving to see the words Trump and 'rationale' in the same sentence.

Raising questions about the need for all these new weapons and their phenomenal costs couldn’t be more important. After all, one thing is guaranteed: any decision to procure such weaponry will, in the long term, mean budget cuts elsewhere, whether in health, education, infrastructure, or fighting the opioid epidemic.

And yet questions of cost and utility are the lesser parts of the new nuclear conundrum. At its heart is the very idea of “usability.” When President Obama insisted that nuclear weapons had no battlefield use, he was speaking not just to this country but to all nations. “To put an end to Cold War thinking,” he declared in Prague in April 2009, “we will reduce the role of nuclear weapons in our national security strategy and urge others to do the same.”

If, however, the Trump White House embraces a doctrine that closes the distance between nuclear weapons and ordinary ones, transforming them into more usable instruments of coercion and war, it will also make the likelihood of escalation to all-out thermonuclear extermination more imaginable for the first time in decades. There is little question, for instance, that such a stance would encourage other nuclear-armed nations, including Russia, China, India, Israel, Pakistan, and North Korea, to plan for the early use of such weaponry in future conflicts. It might even encourage countries that don’t now have such weaponry to consider producing them.

These are the very sort of nuances that don't play well with the Mango Mussolini. The theories of nuclear escalation are beyond Trump's intellectual and psychological "pay grade." Worse yet, the Dogs of War have his ear.

Now, as the seemingly threat-free zone of a post-nuclear era is drawing to a close, the possible use of nuclear weapons—barely conceivable even in the Cold War era—is about to be normalized. Or at least that will be the case if, once again, the citizens of this planet don’t take to the streets to protest a future in which cities could lie in smoldering ruins while millions of people die from hunger and radiation sickness.

Can I have one?

Why don't they just tie the Orange Gibbon to one of these new, most bestest strongest weapons and let him push the damn button?


No apologies needed, Lulymay. Even without a pinched neck I can see your point.

Mound
I believe that your headline photo is from a concealed carry ad by the NRA!!


TB, I remember those days. I was awestruck by the "atomic cannon" called "Long Tom." While it was an oversize but conventional looking artillery piece, it was transported by two tractors, one at each end and with independent steering. It was intended to be deployed near to the battle line which meant it had to be capable of working its way through rubble-strewn roads and sharp corners.