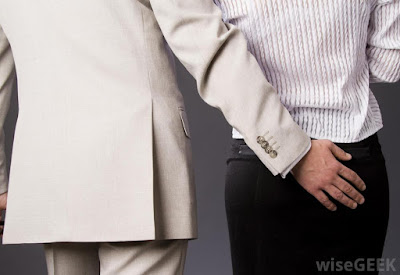 If Harvey Weinstein did anything good in his life it may be the role he played in bringing sexual harassment of women to the forefront. Harvey did a lot to expose the licentious nature of his stomping grounds, Hollywood, where the "casting couch" has been the stuff of jokes for generations.

Harvey did for show biz what a host of fundamentalist preachers have done for the evangelists going back to Jimmy Swaggert,  Jim Bakker, Ted Haggard, Eddie Long and others. It's no wonder these evangelical fundamentalists support a self-confessed serial sexual predator president or now rally behind alleged teen molester, Roy Moore. Those two guys must seem like part of the family.

Now old wounds are being revisited. An article in The Atlantic stirs the nasty embers of Bill Clinton's sordid past and reminds us of how far women have come since Anita Hill bravely testified before the Senate about what she had endured from Clarence Thomas.

Every traditional bastion of male power is coming under the spotlight. Politics is foremost. News reports indicate that the Weinstein Effect is sweeping state houses across the US as women are emboldened to confront their abusers.

Politics and sex scandals go hand in hand. Wiki has a list of US sex scandals going back to 1776 featuring names such as Alexander Hamilton, Thomas Jefferson, Andrew Jackson, Daniel Webster, James Buchanan, Grover Cleveland, Woodrow Wilson, Warren Harding and John Kennedy. Remember, those were from the days when the press considered presidential peccadilloes off limits.

From 1970 on the list includes members of Congress and it's a real tsunami of debauchery, straight and gay.

Now the Europeans are taking a look at their own history of sexual abuse/harassment. Deutsche Welle published this graphic. 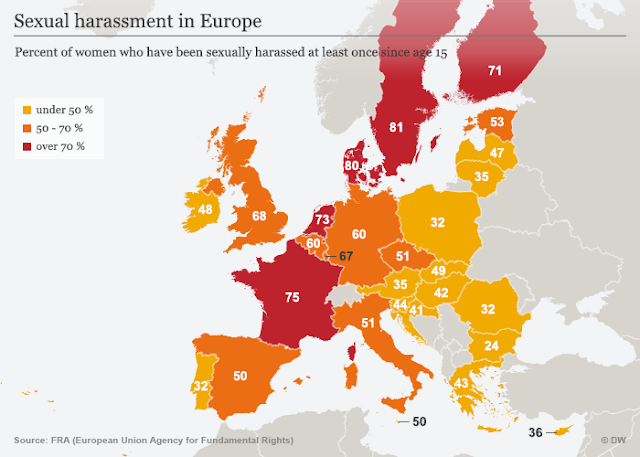 Oddly enough the Scandinavian countries seem to be the hotbed of harassment, especially Sweden where 81% of women report having been sexually harassed at least once since age 15.

Scandinavia, of all places — regarded as a group of model countries in terms of gender equality — produced some strikingly negative results. In Sweden 81 percent of women stated that they had been sexually harassed in one form or another from the age of 15 onwards. These rates are similarly high in Denmark, the Netherlands and Finland. Three out of four French women have also experienced sexual harassment. At the other end of the scale is Bulgaria, where just 24 percent of women indicated that they had been harassed at some point in their lives. The levels are similarly low in Romania and Poland.

"We found that in certain member states it's less likely that women will talk about incidences of sexual violence or harassment with other people," says [Joanna Goodey, of the EU Agency for Fundamental Rights]. She explains that history has had a hand in the fact that in Sweden, for example, it is normal nowadays to report sexual assaults. Unlike in eastern Europe, gender equality has been a subject of discussion there for many years, she points out.

Are we really on the verge of a tide change on sexual harassment and women's rights? In The Guardian, Jessica Valenti writes that, for women, the sheer scale of this thing is exhausting.

Meanwhile a self-admitted serial sexual predator remains ensconced in the White House. Wake me up when he's run out on a rail.
Posted by The Mound of Sound at 11:50 AM

Considering the amount of butt-pinching in Italy, I'm surprised to see that country come in at 51%. Is butt-grabbing is so common that it doesn't register as sexual harassment? Or are people drawing fine distinctions between harassment and assault?


The Deutsche Well article attempts to explain that by pointing to the relative empowerment of women in Scandinavia contrasted to other nations, especially in southern and eastern Europe.

And the winner is...
https://www.theguardian.com/world/2017/nov/12/silvio-berlusconi-after-tax-fraud-sex-scandals-heart-surgery-back-sicily-election

Holy shit, you can't make these thing up.

The effects of "Hurricane Harvey" will be felt for quite some time.
This "firestorm" has been "smoldering" for ... centuries, actually ... millenniums in fact ... and now it's so out-of-control I don't think it'll ever be "put out".