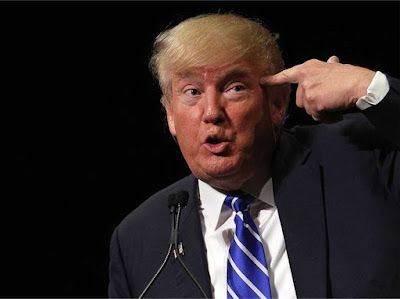 From the "And You Thought He Couldn't Get Any Lower" file, the Mango Mussolini has again shown his true colours and, once again, he's got the Brits mad at him.

The president’s decision to share the posts by Fransen, who is facing charges of causing religiously aggravated harassment, was described as “wrong” by the official spokesperson of the prime minister, Theresa May.

A statement from No 10 said: “Britain First seeks to divide communities by their use of hateful narratives that peddle lies and stoke tensions. They cause anxiety to law-abiding people.

“British people overwhelmingly reject the prejudiced rhetoric of the far right which is the antithesis of the values this country represents, decency, tolerance and respect. It is wrong for the president to have done this.”

Trump, who has 43.5 million followers on Twitter, retweeted three separate posts by Fransen on Wednesday, which all included separate, unverified, anti-Islamic videos.

One purported to show a group of Muslims pushing a boy off a roof. Another claimed to show a Muslim destroying a statue of the Virgin Mary and another claimed to show a Muslim immigrant hitting a Dutch boy on crutches. In the latter case at least the videos’ credibility was cast in doubt when it emerged that Dutch police and media never suggested the attacker was a Muslim immigrant in their coverage of the incident.
Posted by The Mound of Sound at 9:21 AM