A "Century of Revolution and Chaos" 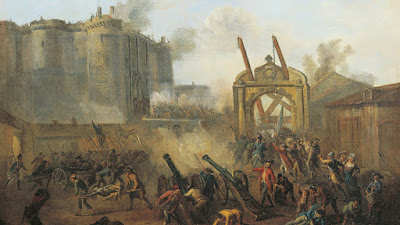 When we entered the 21st century a few history types predicted we were embarked on a century of revolution and chaos. They suggested that our traditional institutions and modes of organization would fail us and, in some places, they would be overthrown. It seems those predictions of 20 years ago are coming to pass.

In many ways, the unusual moment we are experiencing today resembles the late nineteenth and early twentieth centuries, when interlinked political-economic crises and social revolts and revolutions completely transformed our world. Many of the democratic rights and liberties that we see as essential today – including universal voting rights, the 8-hour working day, rights to divorce, unionize or national self-determination – have their roots in the social revolts and revolutions of the early twentieth century.

Recent studies on social movements and revolutions highlight very interesting similarities between these two periods. Mark Beissinger at Princeton University, for instance, found that the number of revolutionary situations between 2010-2014 are almost equal to the 1915-1919 period. At the Arrighi Center for Global Studies at Johns Hopkins University, my colleagues and I also found that the frequency and geographical spread of social protests around the world since 2010 is exceptionally high, making the current moment comparable to the period of world revolutions of 1905 and 1917-1919.

...Setting aside prospects about revolutions, even the utopianism of the 19th century socialists (e.g. those of Owenites, Saint-Simonians, Fourierists) has vanished from the political imagination of the Global Left. It seems that efforts aiming at re-establishing the mid-20th century welfare states — which had provided some security to parts of the working class population in Global North at the expense of exclusion of billions of people in the Global South — has replaced both the utopian and revolutionary visions. That is why today it is much easier to imagine the end of the world than to imagine the end of capitalism and the existing world political order.

So far the affluence of the developed world has averted any significant social unrest much less revolution. Yet it's hard to see tranquility ahead as the full brunt of the climate crisis reaches our borders. Climate research predicts this will begin in the coming decade in tropical zones and it will have an  immediate ripple effect across the temperate north and the south. The massive migration of marine life - fish, marine mammals and seabirds - ever poleward is our bellweather. We will not escape what they flee from.

In my readings for this post  I stumbled across a study in LiveScience that contends America has a 50-year revolutionary cycle and the next event is due around 2020.

I have some difficulty with this theory but, hey, I'm no ecologist, evolutionary biologist or mathematician. And it does seem to echo the warnings of some, such as Chris Hedges, who contend that America is now simmering in a pre-revolutionary state. Then again, how many once relatively cohesive societies are not, today, deeply riven? How many have not succumbed to something vaguely resembling tribalism, camps that are inherently suspicious and hostile toward each other? Where drawbridges are pulled up, the portcullis lowered, as we focus on not what unites us but everything that divides us?

In a comment yesterday on another blog, Northern Reflections, I suggested that these deeply divided societies, such as America's, operate like an open wound that leaves the state undefended against viral infection, Donald Trump being a perfect example. The virus enters the bloodstream, sepsis sets in and, unless promptly and forcefully treated, death ensues.

America is riven. Its government is detached from its people. Political capture begat regulatory capture and now, with Trump at the helm, even judicial capture is in place. The 2014 Princeton study by Gilens and Page documents how America's 'bought and paid for' Congress routinely favours special interests when they clash with the public interests. Professors Gilens and Page concluded there was no doubt that the US had ceased to be a democracy and had, instead, become an oligarchy.

Political capture meant that regulated industries could stack regulating boards and bodies with their own representatives, giving them direct control over some vital governmental powers. What started with establishing influence progressed into control of some powerful bodies.

Throwing Trump out of office is not going to remedy these ills. They existed before he decided to seek the Republican nomination. It's no surprise that the private interest influence and control has consolidated under Trump's administration.

The public is acrimoniously divided to the point where it is sometimes too distracted to object. Trump's people hear his harangues against the "deep state" when the real alternative government is right before their eyes in the capture of political and regulatory power.

These are the conditions that attack the immune system of liberal democracies that, around the world, are in retreat and, in some cases, succumbing to authoritarian rule.

While private sector borrowing accounts for the vast majority of the total, the rise puts governments and individuals at risk if the economy slows, she said.

"Global debt -- both public and private -- has reached an all-time high of $188 trillion. This amounts to about 230 percent of world output," Georgieva said in a speech to open a two-day conference on debt."

So the world economy had better keep growing, even as we realize the need to reduce fossil fuel energy at the same time.


Solon, the ancient Greek generally credited with introducing democracy, knew how to handle debt levels that literally choked his nation. Since debt was destroying Athens, it was simply written off, expunged.

"When Solon came onto the Greek scene in 6th century BC, Athens was in disarray. Plutarch tells us that strife had engulfed the city, bringing it to the brink of anarchy. The source of this strife was that “all the common people were weighed down with debts they owed to a few rich men,” according to Plutarch.

"Making matters worse, debtors who were unable to make payments when they were due were seized and sold into slavery.

"A fragment of Solon’s poetry describes a situation in which many of the poor “have arrived in foreign lands/sold into slavery, bound in shameful fetters.”

"In 594 BC, Solon was appointed archon of Athens. His solution to his city’s strife was to cancel both public and private debts and end debt slavery."

Guess what happened? The economy boomed. People who held debts that they would otherwise never recover lost nothing. Those who were unable to pay their debts suddenly had money they could use to buy products to support themselves and their families. Athens prospered. Seisachtheia, the "shaking off of burdens".