Trudeau Pipeline Gets Pushback in Washington 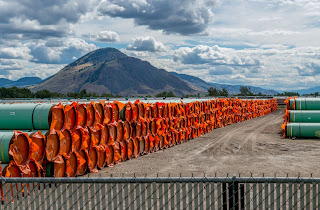 A group of climate activists in southern Washington are blocking the delivery of pipe from India destined for the construction of the Justin Trudeau Memorial Pipeline.


Young activists interrupted the delivery of a controversial pipeline to a port in southern Washington at daybreak on Tuesday, once again taking the lead in the climate fight.

Tuesday’s protest by Portland Rising Tide was part of a continuing effort to disrupt the opening of project that expands a pipeline running from Edmonton, Alberta, to the coast of British Columbia and would open export markets to hundreds of thousands of barrels of crude oil from the Alberta tar sands.

Climbers flanked by kayaks chained themselves to a pier on the Columbia River between Oregon and Washington, intending to intercept the delivery of pipe manufactured in India for the project.

Pipe from India? I wonder if India supplied the pipe for the new Keystone XL pipeline that ruptured in North Dakota, spilling 1.4 million litres of diluted bitumen.

Depicted is pipe now stored in Kamloops soon to be aimed at the British Columbia coast.

There's nobody in Canada who can manufacture pipe for pipelines? Nobody in Hamilton fer crissake? Hard to believe. Made in India instead? Must be classed as foreign aid sending that money overseas. Ore smelted no doubt with coal and and then more GHG emissions shipping the stuff by sea to North America.

Is there no port in BC where pipe can be unloaded? Again, hard to believe. Why in hell was the pipe unloaded in Washington State? It looks as though there were palms being greased all over the world on this one except here at home.

I find all this most curious. Much more curious than the protests.

"Is there no port in BC where pipe can be unloaded?" Sure, we can re-enact the Boston Tea Party in Coal Harbour. That would be fun.