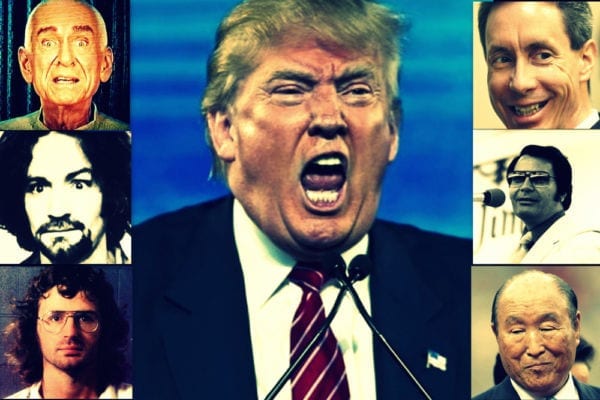 Critics of the Republican Party are increasingly depicting the GOP as a "cult." It's no longer the party of Lincoln. It's the cult of Donald J. Trump. 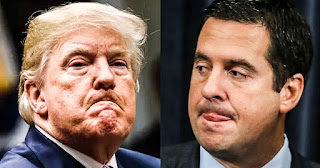 If you were on trial on national television, facing the possible loss of your job and the probable loss of what remains of your reputation, you might not place your fate in the hands of Devin Nunes.

Nunes is a one-time dairy farmer who now milks the bursting udders of an entire herd of conspiracy-minded cows.

...Less the cream of the cream, Nunes is more like the curd of the absurd. This sadly is the bovine bedlam we’re all committed to for the next 12 months of American politics.

It’s a place where the best defense of Trump exhorting a foreign leader is that he was somehow rooting out corruption; where he was supposedly investigating foreign interference in the 2016 election when he was bribing a foreign government to interfere in the 2020 election; where the FBI and CIA have undermined themselves; and where the Democrats have been colluding with the Russians.

Nunes led the herd in arguing that this is a victimless crime – the Ukraine president got his stupid missiles anyhow. In fact Nunes was really arguing that impeachment is the criminal victimization of a poor helpless crusader for truth, justice and good government, who happens to live in the people’s house on Pennsylvania Avenue.

By some miracle of telekinesis, Nunes’s brain created a White House video featuring our humble hero, who insisted that his own impeachment wasn’t all it seemed on live television.

“What’s going on now is the single greatest scam in the history of American politics,” said the real estate guy who is something of an expert in scams.

...“It’s all very simple,” said our very simple president. “They’re trying to stop me because I’m fighting for you.”

This may come as news for anyone who is not circling the barnyard. Trump was apparently fighting for regular Americans when he was extorting the Ukraine president to smear Joe Biden.

Trump and Nunes are obviously hoping that voters cannot see through the fog on this farm. These hearings are so darn complicated and foreign, maybe Americans will never remember whether four legs are good or bad.

This is the latest in a long line of so-called defense strategies that have run the gamut from unlikely to unbelievable. First came the wild fabrications: Trump’s phone call with Ukraine’s president, Volodymyr Zelenskiy, was supposedly perfect, and the whistleblower doesn’t exist.

Then came the wild conspiracies: the Democrats were themselves fabricating evidence in secret hearings that somehow included Republicans. We spent an epoch or two debating Latin tit-for-tats. Now we have arrived at the stage of debate that involves hurling turds at a wall in the hope of finding something adhesive.

But what is a cult? What common threads run through the Branch Davidians, the Peoples Temple, the Manson Family, the Moonies, Heaven's Gate, and now the GOP and the Cult of Maga. From the International Cultic Studies Association:


The group claims to pursue lofty goals (e.g., salvation, bringing enlightenment to the world for the sake of peace, or solutions to specific world problems and injustices), sometimes through violent means. But a close look at the group’s accomplishments will invariably show that these publicly proclaimed goals are not reached, or that they mask less noble goals, such as amassing monetary wealth, gaining power and control over the followers, and feeding the leader’s need for adulation. Followers support and promote the leader’s self-aggrandizement in part because they perceive themselves as gaining prestige in the group for their righteous devotion and service to the leader.

The defining characteristic of leaders of cultic groups is their need for adoration and for the continual buttressing of their delusional sense of omnipotence and infallibility. The leaders use all the means at their disposal—intimidation, seduction, systems of reward and punishment—to enforce the followers’ dependence on them. These leaders present themselves as fully realized or otherwise highly spiritual beings who have attained all that they need, or who have transcended need. Followers are typically persuaded to believe that their spiritual and material needs can only be met through total compliance with the leader’s demands, whether the demands be for work, money, sex, or recruitment of more followers.

Trump and his MAGA cult, public and Congressional, certainly fit that bill.
Posted by The Mound of Sound at 10:08 AM

.. hysterical, may I introduce historical ?
Its the Dance Macabre.. the band leader is Mitch McConnell
Its quite likely one of the greatest political cluster fucks of all time

(apologies re the language.. but not a time for nicety.. time for reality)

But why Donald Trump in particular?
...a self-aggrandizing blowhard elitist hustler with a most abrasive personality? He's not even charismatic in any way.

He's such a boring boorish cliche caricature at that. What would one with any modicum of imagination see in someone like him?
Why are so many folks so taken in by him?

You pose questions I can't answer, Tal? How do so many evangelicals remain loyal to a belligerent satyr who lives his life so contrary to their scripture? What do they make of their spiritual leaders who tell them this man was sent by their God? It's madness.

Why are so many folks so taken in by him?