Bolton Wants to Spill His Guts on Trump? 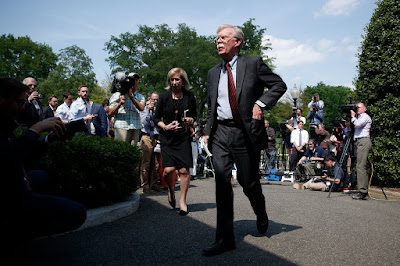 Former Trump national security advisor and bellicose neoconservative may be ready to turn on his former boss.

The New York Times reports that John Bolton's lawyer says his client is ready to sing and has a lot to say.


John R. Bolton, President Trump’s former national security adviser, has knowledge of “many relevant meetings and conversations” connected to the Ukraine pressure campaign that House impeachment investigators do not yet know about, his lawyer told lawmakers on Friday.

The lawyer, Charles J. Cooper, made that tantalizing point in a letter to the chief House lawyer in response to House committee chairmen who have sought Mr. Bolton’s testimony in their impeachment proceedings but expressed unwillingness to go to court to get an order compelling it.

...Mr. Bolton did not show up for a deposition scheduled on Thursday because, his lawyer said, he wants a judge to determine whether he or his former deputy, Charles M. Kupperman, should testify in defiance of the White House. In effect, Mr. Bolton and Mr. Kupperman are asking for a court ruling on competing demands by the executive branch, which does not want them to testify, and the legislative branch, which does.

As tRump said, you can't trust that moustache.

While we shudder at the increasing likelihood of tRump's second electoral college victory in 2020, don't assume everyone is on the same page. Dictators like dictators...

"Trade negotiator who got China into WTO is rooting for Trump’s re-election because ‘Twitterer in Chief’ is easy to read
The US president’s daily tweets to 67 million global followers make him ‘easy to read’, said the former trade envoy and point man for China’s WTO negotiations
Trump is a transparent and realistic negotiator who is concerned only with material interests such as forcing China to import more American products, on which Beijing is able to compromise, Long said"

" Unlike his predecessors, Trump does not pick fights with China on hot-button geopolitical issues such as Taiwan or Hong Kong, where Beijing has little room to manoeuvre, said Long, who now heads the Centre for China and Globalisation, a Beijing-based think tank.
“Trump talks about material interests, not politics,” Long said in an interview with South China Morning Post in Shenzhen. “Such an opponent is the best choice for negotiations.”"
" tensions will remain high “as long as China remains a substantial economic success” "

I imagine every adversary has its own team of psychologists devising tactics for dealing with the Cheeto Benito, exploiting his many flaws and weaknesses, playing the guy. Putin was on that from the start.

It's one thing when Trump is manipulated for trade purposes. It's another when he's the broken links in America's chain mail.