A jarring report today in The New York Times on Chinese oppression of its Muslim ethnic minorities, mainly Uighurs, in its westernmost territories adjoining Pakistan and Afghanistan.

The newspaper has obtained 400 pages of internal Chinese government documents that call for "absolutely no mercy" in crushing dissent. The documents indicate the Chinese have already shipped over a million Uighurs, Kazakhs and others to internment camps for "retraining."

Children saw their parents taken away, students wondered who would pay their tuition and crops could not be planted or harvested for lack of manpower, the reports noted. Yet officials were directed to tell people who complained to be grateful for the Communist Party’s help and stay quiet.

...The Chinese leadership wraps policymaking in secrecy, especially when it comes to Xinjiang, a resource-rich territory located on the sensitive frontier with Pakistan, Afghanistan and Central Asia. Predominantly Muslim ethnic minority groups make up more than half the region’s population of 25 million. The largest of these groups are the Uighurs, who speak a Turkic language and have long faced discrimination and restrictions on cultural and religious activities.

...Since 2017, the authorities in Xinjiang have detained many hundreds of thousands of Uighurs, Kazakhs and other Muslims in internment camps. Inmates undergo months or years of indoctrination and interrogation aimed at transforming them into secular and loyal supporters of the party.

Of the 24 documents, the directive on how to handle minority students returning home to Xinjiang in the summer of 2017 offers the most detailed discussion of the indoctrination camps — and the clearest illustration of the regimented way the party told the public one story while mobilizing around a much harsher narrative internally.

Even as the document advises officials to inform students that their relatives are receiving “treatment” for exposure to radical Islam, its title refers to family members who are being “dealt with,” or chuzhi, a euphemism used in party documents to mean punishment.

The government sends Xinjiang’s brightest young Uighurs to universities across China, with the goal of training a new generation of Uighur civil servants and teachers loyal to the party.

The crackdown has been so extensive that it affected even these elite students, the directive shows. And that made the authorities nervous.

“Returning students from other parts of China have widespread social ties across the entire country,” the directive noted. “The moment they issue incorrect opinions on WeChat, Weibo and other social media platforms, the impact is widespread and difficult to eradicate.”

...The authorities appear to be using a scoring system to determine who can be released from the camps: The document instructed officials to tell the students that their behavior could hurt their relatives’ scores, and to assess the daily behavior of the students and record their attendance at training sessions, meetings and other activities.

“Family members, including you, must abide by the state’s laws and rules, and not believe or spread rumors,” officials were told to say. “Only then can you add points for your family member, and after a period of assessment they can leave the school if they meet course completion standards.”

"Round up everyone who should be rounded up."


The party had previously used the phrase — “ying shou jin shou” in Chinese — when demanding that officials be vigilant and comprehensive in collecting taxes or measuring harvests. Now it was being applied to humans in directives that ordered, with no mention of judicial procedures, the detention of anyone who displayed “symptoms” of religious radicalism or antigovernment views.

The authorities laid out dozens of such signs, including common behavior among devout Uighurs such as wearing long beards, giving up smoking or drinking, studying Arabic and praying outside mosques.

Meanwhile, as mom and dad are busy at "school" being re-educated, Beijing is shipping in Han Chinese "settlers", shades of what was done to Tibet.

This brings me to the point of this post - must we really do business with regimes as odious as China's or the Saudis'? Where do we draw the line? Yes - they're big, I get it. Too big to oppose? This is a brutal, totalitarian regime, a threat to global peace and a bully.

You may be dismissing this. It's China's problem, after all. No reason for us to worry.  If you think that, you haven't been listening to what's being said in Beijing and other Chinese power centres.

The Chinese have been remarkably candid, probably because they think we're a pretty complacent bunch. The Chinese are not really keen on becoming the new United States of America. They get the whole liberal democracy/capitalism thing, the model we formulated for the world order post WWII, and they're not fans.

China played by our rules, at least in the capitalism context, and it paid off biggly for them. But they've never warmed to democracy. Ask the people of Tibet. Ask the Uighurs or the people of Hong Kong. 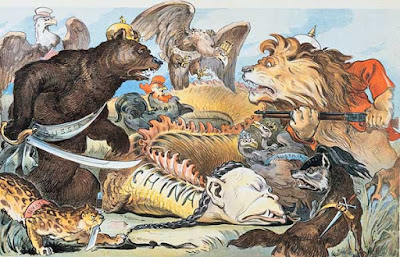 The Chinese believe, as in war so in peace, to the victors go the spoils. China wants to define the next world order. It really does. Just ask it. They're also dealing with this "Century of Humiliation" thing, especially China's military brass. The Chinese have been marking National Humiliation Day since 1916. They remember that it was less than three centuries ago that China and India had the largest and second-largest economies in the world. Then we (that's you, Britain) put in an appearance, showed them what was what, and became the economic titans. Somebody is out for a little payback.

American military officers who have been involved with their Chinese counterparts have returned home with the willies.  Apparently when they engage in war games, the Chinese do not play nice. The enmity, it is claimed, is visceral. Then again, the Americans don't always help. I recall an op-ed in the Proceedings of the US Naval Institute in which an officer lamented how the Chinese were bound for first place and America was allowing that "without a fight." Bad attitude.

So China wants a new, made in Beijing, world order, one that has little time for western liberal democracy, and it wants the world, or at least most of it, to fall into step. What if that became the price of admission to a new form of globalism? You want to play, you pay.

Then you've got the 8-gazillion tonne gorilla in the room - climate change.  China may be the biggest emitter today, barely, but it also has a huge population that makes the junk we want and, besides, we had a 200-year head start with the carbon fuels.

Climate change could destabilize China and India. It could be an economy wrecker too. What then?

You've got an emerging dominant power (Thucydides Trap) in a mood to throw its weight around and rewrite the rules of the road, with a rapidly modernizing military led by guys with massive chips on their shoulders, facing devastating and destabilizing climate change impacts in the not-distant future.

Is it really in our best interests to simply ignore this? Maybe it's time we began taking a few more things personally. Not everything can be written off as "business."

As the West hoists the flag of righteousness , human rights and all , it remains mute on matters that would inflict damage to its economy particularly when it comes to military weapons.
Tis is a sad fact of life that we ignore this , it makes all of us complicit and for many hypocritical.
Are the Chinese doing any more wrongs that Canada has to it's first nations?
In the USA such actions are rarely debated!

I would make only two points:

2. Peter Gzwoski asked this question on 'This Country in the Morning.' I paraphrase: Americans define themselves as, "As American as apple pie." Finish the sentence, "As Canadian as ..."

Heather Scott nailed it, "As Canadian as ... possible under the circumstances."

It might not be long, Trailblazer, that China implements it own Manifest Doctrine and its very own Monroe Doctrine for Asia Pacific/Africa/Middle East.

How ironic. We've spent most of the post-war era with one clumsy effort after another aimed at containing China - because we could. Now they might do something eerily similar to us.

Thank you for those thoughts, James. Much appreciated.

13 BC retirement homes are now controlled by the Chinese govt:

Hugh, yes and some are on Vancouver island. the ones in Vancouver sit on some very valuable land. At some point, they will simply announce they are out of the senior housing business and empty the places. Developers interested in making a buck will be more than happy to build the new places. On the other hand the provincial government will have some trouble suddenly dealing with homeless seniors, in vunerable conditions. We will not be ready for it, no more than for a pandemic or earth quake. It also gives China an opportunity to guage how far they can push us. If these companies don't do a good job, how we will react as citizens and governments. Will be let it slide, and they're home free or will we expropriate their busineses--they have the message, we don't tolerate bad behaviour.

China has made huge inroads into this country, via their business interests and land ownership. there is an interesting documentary series on the Knowledge network about China's incursions into the economy of various nations.

We might be better off to not have an agreement with China and if we do, ensure it has no impact on our soverignity. We need to treat China for what is it is, a terrorists nation, with no regard for human rights, democracy, or our way of life. Some may argue China is not a terrorist nation, but if you have a look at what they are doing to the Muslims of China, its terrorism.

Chin in fact is working slowly but surely to turn Canada, B.C. certainly into just another Chinese province. We have to look no further than the protests by Chinese nationals living here when it comes to pro Hong Kong democracy, building hospices--a bad thing in some Chinese culture.

Canada exports a lot of produce to China, and we saw what happened when they decided to not accept pork suddenly. Canada needs to have a plan B on anything they export to China or some day we will find our economy crashing if we do not follow their party line.

Canada needs to speak out loudly on the topic of the holocaust going on in China.