Asleep at the Wheel

With another UN climate summit next week there are plenty of papers flooding in. Canada needs a carbon tax of no less than $210 per ton of GHG emissions, sort of thing. These give us an idea of the daunting challenges that we'll have to confront if the world is to have any chance of a "soft landing" on climate change.

There's a constant theme - the longer you avoid action the more it will cost in the long run. It's been said that Canada needs a trillion dollars worth of infrastructure overhaul but, if we don't, it will cost the economy far more in the future.

Only it's not just a matter of how much more it'll cost or how much harder it will be down the road. That implies we still have options that already might have been foreclosed. What if we've already pulled that trigger? What if those options to address the climate crisis have already been lost?

A new paper in the journal Nature considers if it's already too late, whether we have already crossed so many tipping points that we're hooped. The authors include the current and past directors of the prestigious Potsdam Institute, Johan Rockstrom and Hans Joachim Schellnhuber, two of the big guns in the field of climate change.

The report notes it wasn't that long ago that it was believed these tipping points might be triggered by 5 degrees Celsius of heating. Now research suggests a lower threshold of 1 to 2 degrees Celsius which means we may already be too late to avert real trouble.

If current national pledges to reduce greenhouse-gas emissions are implemented — and that’s a big ‘if’ — they are likely to result in at least 3 °C of global warming. This is despite the goal of the 2015 Paris agreement to limit warming to well below 2 °C. Some economists, assuming that climate tipping points are of very low probability (even if they would be catastrophic), have suggested that 3 °C warming is optimal from a cost–benefit perspective. However, if tipping points are looking more likely, then the ‘optimal policy’ recommendation of simple cost–benefit climate-economy models4 aligns with those of the recent IPCC report2. In other words, warming must be limited to 1.5 °C. This requires an emergency response. 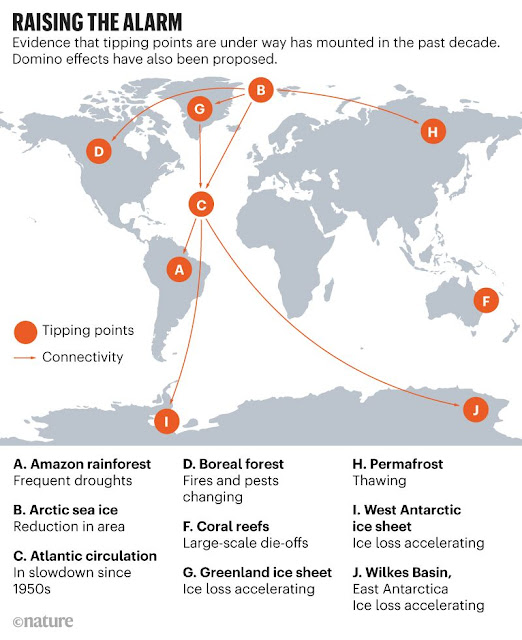 As well as undermining our life-support system, biosphere tipping points can trigger abrupt carbon release back to the atmosphere. This can amplify climate change and reduce remaining emission budgets.

Deforestation and climate change are destabilizing the Amazon — the world’s largest rainforest, which is home to one in ten known species. Estimates of where an Amazon tipping point could lie range from 40% deforestation to just 20% forest-cover loss8. About 17% has been lost since 1970.

...With the Arctic warming at least twice as quickly as the global average, the boreal forest in the subarctic is increasingly vulnerable. Already, warming has triggered large-scale insect disturbances and an increase in fires that have led to dieback of North American boreal forests, potentially turning some regions from a carbon sink to a carbon source9. Permafrost across the Arctic is beginning to irreversibly thaw and release carbon dioxide and methane — a greenhouse gas that is around 30 times more potent than CO2 over a 100-year period.

Have We Already Blown the 'Carbon Budget'?


The world’s remaining emissions budget for a 50:50 chance of staying within 1.5 °C of warming is only about 500 gigatonnes (Gt) of CO2. Permafrost emissions could take an estimated 20% (100 Gt CO2) off this budget10, and that’s without including methane from deep permafrost or undersea hydrates. If forests are close to tipping points, Amazon dieback could release another 90 Gt CO2 and boreal forests a further 110 Gt CO211. With global total CO2 emissions still at more than 40 Gt per year, the remaining budget could be all but erased already.

The cascade is a world of knock-on effects and dangerous synergies in which the sum is far greater than the parts.


In our view, the clearest emergency would be if we were approaching a global cascade of tipping points that led to a new, less habitable, ‘hothouse’ climate state. Interactions could happen through ocean and atmospheric circulation or through feedbacks that increase greenhouse-gas levels and global temperature. Alternatively, strong cloud feedbacks could cause a global tipping point.

...In our view, examples are starting to be observed. For example, Arctic sea-ice loss is amplifying regional warming, and Arctic warming and Greenland melting are driving an influx of fresh water into the North Atlantic. This could have contributed to a 15% slowdown since the mid-twentieth century of the Atlantic Meridional Overturning Circulation (AMOC) , a key part of global heat and salt transport by the ocean. Rapid melting of the Greenland ice sheet and further slowdown of the AMOC could destabilize the West African monsoon, triggering drought in Africa’s Sahel region. A slowdown in the AMOC could also dry the Amazon, disrupt the East Asian monsoon and cause heat to build up in the Southern Ocean, which could accelerate Antarctic ice loss.

What Humanity has Wrought.


We define emergency (E) as the product of risk and urgency. Risk (R) is defined by insurers as probability (p) multiplied by damage (D). Urgency (U) is defined in emergency situations as reaction time to an alert (τ) divided by the intervention time left to avoid a bad outcome (T). Thus:

The situation is an emergency if both risk and urgency are high. If reaction time is longer than the intervention time left (τ / T > 1), we have lost control.

Fighting for the Consolation Prize, Playing for Time.


We argue that the intervention time left to prevent tipping could already have shrunk towards zero, whereas the reaction time to achieve net zero emissions is 30 years at best. Hence we might already have lost control of whether tipping happens. A saving grace is that the rate at which damage accumulates from tipping — and hence the risk posed — could still be under our control to some extent.

It was at the Paris climate summit in 2015 that the community of nations sought to keep global warming at less than 1.5 degrees Celsius. Schellnhuber explained that meeting that goal would require nothing less than the "induced implosion" of the fossil fuel industries. Governments would have to immediately begin reining them in and then shutting them down. Survival meant bursting the 'carbon bubble.'  Fossil fuels, especially coal and bitumen, would have to be abandoned, left in the ground, as we resorted to lower-carbon fossil energy through the transition to alternative clean energy.

The past four years have demonstrated that, among the petro-states, there's no appetite for that induced implosion. Instead we're doubling down on fossil fuel production, including the really high-carbon, low-value products that will wreak havoc among all species on Earth.

Not only are we doubling down on fossil fuels, we're actually giving up on renewables! Ford spent $231 million to cancel Ontario's renewable energy projects. But it's not just Ontario. As Kevin Drum reports:

Europe is pulling back from clean energy research. India and Brazil barely have any to begin with. The United States is flat at about $50 billion—maybe a tenth of what we should be spending. And China, after a decade of research, has decided to double down on coal and slash its clean energy R&D.

We're looking at 4-5 degrees of warming in the second half of the century. It's clear that the Masters of the Universe have decided that corporate profits now are more important than averting global catastrophe.

Cap, it troubles me deeply that I can't refute your argument. Unfortunately, all of that is true.

OPEC and the IEA are both predicting a rosy and profitable future for fossil fuels, including thermal coal, at least out to the 2040s. That will blow right through the carbon budget.

I've been writing for years that there can be no real success on the greenhouse gas front that doesn't also tackle overpopulation and our insanely rapacious overconsumption of the planet's resources, renewable and non-. The three are tightly interwoven. You must effectively address all three if you're to have any hope on even one of them. We have to retreat until we're once again in harmony with our finite biosphere, nature.

I don't know what to expect from next week's UN COP climate summit but I don't expect it to chart out some global strategy on overpopulation or excess consumption.

One of the greatest failures of climate scientists may turn out to be their until very recent reluctance to discuss the climate crisis in the broader context of these companion existential threats. They should have been taking that comprehensive approach ten, if not twenty, years ago.

I think I'll pen an essay on the inability of our modern, global civilization to handle the really dangerous problems of the day. Most everyone is willing to do a little, few are willing to do a great deal, and, in most cases, what is proposed ignores the urgency that demands rapid responses. We're fiddling. Rome burns.

.. in Canada eh.. any pathway or route to environmental or climate sanity.. re-valuation or redemption in the future, runs straight through OUR Federal Parliament and OUR Provincial Legislatures.. and.. I will never use the term 'Enemy' lightly.. or 'Public Servant' lightly either.. especially linked in the same sentence re our 'Honorable' elected MP's and MPL's, but I fear that is where OUR governance has retreated or metastisized to. That of course requires a cold hard examination of THEIR political parties.. Are those parties in any way OURS.. ?? Oh please show me a shred of evidence of their connection to US..

Flashing back to your great 'lifeboat' analogy.. I see the Captain and Leading Officers loading up the most seaworthy boat with provisions, charts, compass, water, any precious cargo, spare canvas, rum, life jackets, fishing line, tobacco, shop's log.. abandoning US on an ice floe, scuttling the ship and lifeboats, as below the waterline its rotted, wormy anyway, due to ludicrous due care.. and declaring 'All's Well' and punting off gaily in the captain's pinnace to a nearby American shore. WE are left shivering and adrift in the fog, icy waters, mist and currents in a truly busy shipping lane amidst iceburgs, supertankers and container ships.

Do I have this wrong ?

Yes, the iceberg part will be wrong. I doubt we'll even see icecubes by then.

I emailed the author and was told the debt to GDP ratio was what they looked at, not the total BC govt debt, which is growing exponentially at 4.4% per year.

The BC budget shows GDP growing at 4.7% per year, keeping the all-important debt/GDP ratio stable.

So, everything will be fine as long as GDP grows exponentially.

Meanwhile we need to ramp down fossil fuels, which are currently powering the economy.

For example tourism, which is an important part of the BC economy, runs on fossil fuels.

Tourism is all about cruise ships, air planes, buses, trains, cars, trucks, skidoos, motorboats, motorcycles, all of which run on fossil fuels.

Some seem to think it's possible to ramp down fossil fuel use and grow the GDP at the same time, which is nonsensical and delusional.