Some Clouds Do Have a - BOOM - Silver Lining 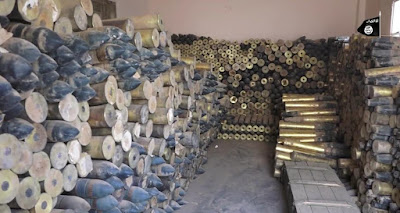 Military ordinance, such as bombs, rockets or mines, doesn't like climate change. In the really hot regions, it can be an explosive situation. They're called UEMS, unplanned explosions at munitions sites. From Scientific American:

If exposed to extreme temperatures and humidity for long enough, a munition can become unstable and may even more or less strip itself apart. The wood in antipersonnel stake mines rots; rubber and plastic in plastic mines can shatter in the unrelenting sun. Without regular monitoring, heated explosive materials within munitions can force their way through seals and filler plugs, a shell casing’s weakest points. Nitroglycerin becomes so sensitive when it absorbs moisture that even a slight shake can set it off. White phosphorus melts into a liquid at 44 degrees C and can crack a munition’s outer casing as it expands and contracts with the temperature. When explosives leak out, some react with impurities in the air to form dangerously volatile crystals on the exterior that can explode with friction or motion. “The physical effect of abnormally high temperatures is that a high level of stress occurs between components because of the different expansion rates of the individual materials,” says John Montgomery, chief technical adviser for explosive ordnance disposal at the Halo Trust, a land-mine-clearance nonprofit organization.

Mortar shells, rockets and artillery rounds are particularly vulnerable because they are powered by propellants that make them liable to launch at the slightest provocation. Chemical stabilizers prevent self-ignition. But for every five-degree-C increase above its ideal storage temperature, the stabilizer depletes by a factor of 1.7, according to the Halo Trust. That depletion accelerates if munitions are exposed to a wide temperature swing over the course of the day. Eventually, there is no more stabilizer—and as a consequence, sometimes no more munitions site either. Most of Cyprus lost electricity in July 2011 when the nation’s principal power station was taken out by 98 shipping containers full of confiscated Iranian munitions that exploded after cooking for months under the Mediterranean sun, eroding their propellants.

Higher temperatures also raise the risk of handling errors by fatigued armorers. From chaotic conflict zones to the best-equipped NATO-standard storage facilities, soldiers say summer is when explosive accidents peak because of a combination of foggy decision-making and more sensitive munitions, both caused by extreme heat. “In the military, everything is more difficult when it’s summer,” says an Iraqi artillery officer who gives his name as Ali. “And now summer never ends.”

Makes one wonder how unexploded US cluster bombs have lasted so long, let alone mines and other munitions all over Asia. Or is it a case that if a fly lands on one they'll explode due to the instabilities created by heat and age? Rubber tends not to shatter in high heat but ooze and melt into oil. That's why Lafarge and the Swedes BS on burning old tires for cement production has as a byproduct nasty unburnt oils dripping out of the kiln if you're not extremely careful.

One hopes, but likely in vain, that nuculah weapons are made with not so much nasty plastic and wubber internally. But we do know that a lot of US weapons have Chinese chips in 'em because nobody in the US makes 1974 vintage electronics any more, while preventive maintenance calls for replacement of parts, and much is not readily available. The tangled webs we weave and all that.

Just more delight for the enquiring mind as we tend towards infinity or zero depending on whether its climate or nuclear destruction.

I've seen grassed-over ordinance bunkers that were kept in the mid 50s F to keep the weaponry stable.

Many refineries have similar refrigerated bunkers that house chemicals that must be chilled to avert spontaneous detonation.