Has DFO Screwed Up Again? 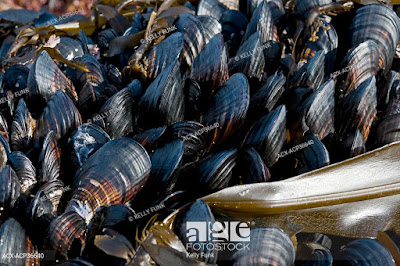 Have BC mussels developed a form of contagious cancer?

The New York Times is reporting on research out of Columbia University that traced the cancer back to Bay mussels from British Columbia and has since spread to shellfish in South America and Europe.

Humans have spread a contagious form of cancer around the world.

“There’s no natural explanation for how that happened without human help,” said Michael Metzger, a biologist at the Pacific Northwest Research Institute in Seattle and a co-author of the report, published in the journal eLife.

While working as a postdoctoral researcher at Columbia University, Dr. Metzger discovered that four species of shellfish — including soft-shell clams and bay mussels — had transmissible cancers of their own. It was the first time anyone had discovered contagious cancer in aquatic animals.

Dr. Metzger and his colleagues suspect that sick shellfish release cancer cells. The cells float along the currents until they are sucked up by healthy animals as they filter seawater for food. In one case, the researchers found, the cancer cells had moved from one species of shellfish into another.

Nicolas Bierne, a geneticist at the University of Montpellier in France who studies blue mussels, realized that this finding perhaps held the solution to a mystery that he had been struggling with.

Analyzing the DNA from blue mussels in France, he and his colleagues had discovered some genetic markers that looked as if they belonged to another species: bay mussels. He might have expected such a result if these species interbred — but bay mussels don’t even live in French waters.

Being fond of our local shellfish I called the seafood shop at the nearby fishing port. They've heard nothing. Seeking assurance I then called the federal Department of Fisheries and Oceans at their Vancouver headquarters. Those who read this blog know the esteem in which I hold DFO.

The fellow I spoke with had heard nothing about it but he put me on to someone else's voicemail. I'm not holding my breath while I await their callback.

If this is a health hazard that DFO has overlooked that could be the final straw. It's time that British Columbia put an end to Ottawa's incompetence and reclaimed jurisdiction over our own fisheries.

.. this is incredibly worrisome. The article does not explain (or its not obvious to me) exactly how humans may be accomplishing the dispersion of contagion. Via ships or boats hulls? Live harvested exports?

This holds dreadful & disastrous potential worldwide.. as does any blight or failure involving food from the sea. For much of the west coast marine issues, a huge aspect of the blame may be laid atop the disaster that was and is Stephen Harper. Yes, his Petro Superpower Wet Dream.. that now Trudeau wants to clamber on board to.

How is that? It was Harper trashing our marine protection legislation to facilitate resource extraction. He folded various ministries including DFO, Environment, Resources, Agriculture etc.. under his uber thumb.. to conform to his 'vision'.. our environment, our species, their habitat, Science, Biology etc.. never had a chance. His pretend ministers like Peter Kent - Environment, simply rolled over to what Ray Novak and the PMO told him he was to do or not do. They buffaloed SARA - Species At Risk via delaying action in the courts and now Trudeau is doing it with ms McKenna et al. Site C under Ms Christy Clark has always been about giving cheap subsidized energy away to power gas Fracking and Expanded Tar Sands extraction of Dilbit.

The many stories regarding DFO having serious issues, interference, coercion.. are rife. Just ask Alexandra Morton.. the obstruction and denial re farmed salmon infecting wild salmon was insidious & ignorant.. even shocking.. or read up on the critical study and resulting report on what the steps are to save BC's salmon fisheries. How many of those stages have been accomplished? Essentially none. Harper of course made sure to defund The Small Lakes Experimental station.. crippling .. kneecapping years of studies.. many by international scientists.

It all comes home to roost.. such insidious large scale ideological assault from elected 'public servants' and captured Political Parties. Alberta is becoming sick from the years.. decades of Conservative political royalty.. comorbid with the carpetbagger ambitions of Harper, Kenney et al.. If BC wants or will accept a disaster like the east coast fisheries collapse.. well Amen.. but in my view, exactly what you suggest.. take it away or lose it to Ottawalberta political fumbling and captured obstruction.

The war cry needs to be 'remember Boat Harbour, remember Grassy Narrows' as tiny microcosms reflecting what truly large scale failure might be like.. ie The Tar Sands Tailings Ponds.. visible from the moon or The Exxon Valdez. Jason Kenney is bringing his own smarty pants special brand of 'bitter years' to Alberta.. and demands a carte blanche bitumen and gas superhighway to the Salish Sea and Pacific Ocean and damn any living creature or habitat that gets in the way. BC needs to reclaim what Gordon Campbell gave away to Harper.. ie complete oversight re Environment vis a vis pipeline applications & approval. Most 'don't get' what Harper was doing.. when stacking regulatory bodies, stripping legislation for 'streamlining' or fast tracking applications, subsidizing foreign owned multinationals.. he was removing 'impediments' to his grand plans.. the old 'divide & conquer' .. choke out Science & Biology.. The Petro Superpower uber alles.. Dominion over all living things, scrape the very earth, poison the waters..

Sal, I don't even know what a "bay mussel" is. Is it what we buy at the seafood shop or a variety that's not commercially fished? I might know if DFO returned my calls but they don't appear to be in any rush.

Like many others, I think they've done a lousy job on fish farms and this doesn't improve their image. Then there's the role they played in devastating the Atlantic cod stocks. I wonder whether the commercial fishery isn't calling the shots?

.. Mound, we have a working model of what failed and collapsed industries are like, and the dreadful consequences.. That's via the Maritimes of Canada. Fisheries ? What fisheries ? Even salmon in the freshwater Interiors are really only available to the fortunate and wealthy.. or have militsry aircraft and aircrews at their service up the Newfoundland/Labrador coasts

Just imagine if the lobster plus all the cultivated shellfish.. clams and mussels were to become toxic to consumption.. What the. Logging is pretty tapped out.. Offshore oil, yes.. snd its light sweet, not Bitumin.. and almost all goes to export because of that high value.. What else is there besides potatoes and oh.. oh.. Tourism ? The saving grace of all !! The damn spectacular scenery and the gracious inhabitants and the music, the heritage..

Transpose to western ie west coast Canada.. still has all the right stuff.. but pipelines a comin, Nation Building they say.. but what nation is a good question.. The BC nation, Canada aside from unhappy certsin Albertans ? Who may only number 2,500 or less.. but loud and proud..

PS .. will be looking up 'Bay Mussels .. our local family run amazing restaurant serves a seafood linguini to die for.. topped with a dozen mussel 'fatties'.. must inquire re source.. our other fave pasta place Gratzi has its menu available as a cookbook.. Baby clam liguini !! Stunning ! Their caesar salad ! WoWser ..

PS 2 .. told oldest family friends & extended families holidaying in Tofino.. to seek out the historic clam chowder.. Middle son says 'the Schooner did not disappoint' .. youngest bro is a master chef & had no arguement.. stoked to hear this


Sal, there's more. Now a lethal virus that kills marine mammals has spread from the north Atlantic to the north Pacific. The sea otter die off, coupled with the mysterious plague that killed off most of our starfish in 2015, is allowing massive swarms of sea urchins to attack and wipe out our once luxuriant kelp forests.

Meanwhile "The Blob" is back bringing an oceanic heatwave to our coast and extending almost to Hawaii.

Federal government indifference (incompetence) is helping to wipe out our salmon stocks. The orca are becoming malnourished and endangered.

And now we discover a bizarrely contagious form of cancer in our shellfish while we have Justin fucking around with a $30/tonne meaningless carbon tax.

Maybe it's no wonder that DFO isn't returning calls.

when hasn't the DFO screwed up?