The Assault on Freedoms 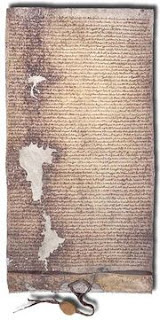 Many of us see Britain as the birthplace of our modern civil rights and freedoms. It all began with Magna Carta Libertatum, the great charter of 1215, that first provided the King could be subject to the Rule of Law. From that evolved the English Common Law that most of the English-speaking world, America included, embraces today.

The first decade of the third millenia may eventually become known as the retreat from civil liberties, civil rights. Notions such as secret surveillance, indefinite detention without charge or trial, and the demise of habeus corpus mark the evolution of a relationship between governments and their peoples that would have been considered outrageous just a decade ago. Australia, Britain, the United States and even Canada have used the war on terror as a pretext to strip away the constraints on government.
Now the Brits are toying with the idea of abandoning the principle of "reasonable cause" to allow UK police to stop motorists at random to demand breath samples. This would gut both the right to privacy and the right to be protected against unreasonable searches by the state.
Parliamentary Advisory Council for Transport Safety director Rob Gifford said the move would be a deterrent. "Giving police this power will make many people think they have a greater chance of being caught."
This smacks of trampling on historic and fundamental rights for the sake of convenience. Rights out never to be abridged except when that is absolutely necessary to achieve a critical purpose and there is no other solution.
Posted by The Mound of Sound at 10:26 AM