Rotten To The Core 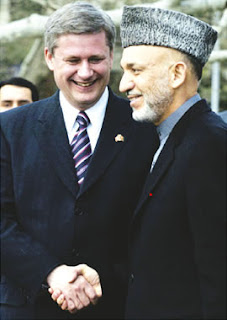 As far as we're concerned, we wish it would just go away. Hamid Karzai's goverment is awash in war criminals. They're warlords who butchered tens of thousands of Afghan civilians in the course of that country's civil wars and who now sit in government voting for their own pardons.


Does anybody find it curious that we don't hear a peep about this from Bush or Cheney much less our Furious Leader, Harpo? Nope, nothing to see here, now move along. We might occasionally criticize the corrupt cops but all we have for Karzai and his parliament of cutthroats is praise.

While you're there, check out their video on cluster bombs. It too is an eye-opener:

http://www.hrw.org/
It's hard not to feel some sympathy for Hamid Karzai. The US put him in power and then forgot about him. There was no one around to give him the muscle needed to keep the warlords at bay so that Afghanistan could have a decent parliament, one that could claim some legitimacy. We didn't so now it's much easier to pretend there is no problem, that Afghanistan has a government that will bring the country real democracy.
Posted by The Mound of Sound at 12:02 PM

You are right. Hamid Karzai's goverment is certainly corrupt, and has elements in it that have not respected human rights, but at the moment there is no alternative unless you want the Taliban to run Afganistan.