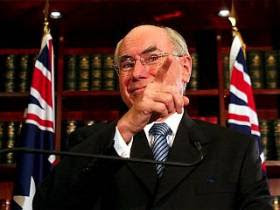 It's a bit much when one head of state can't get a word with the head of state of a neighbouring nation. Yet that's just what happened to the prime minister of the island nation of Tuvalu when he asked for a few minutes of Australian prime minister John Howard's time to chat about a little climate change issue.
The "issue" is that Tuvalu is being submerged beneath rising sea levels. A spokesman for the government of Tuvalu said it's the second time in six years that the country has asked to speak to the Australian leader and got the cold shoulder.
A spokesman for another Pacific island state that faces submergence in coming decades, Kirabati, said that his country would also like to talk to Howard about their crisis but hasn't bothered because he's "not sympathetic to the issue."
Australia is rich in coal which it relies upon as an export and to power its electricity generation system. Until very recently, Howard, like our own Harpo has been a global warming heel-dragger. The last thing the little troll from down under wants to deal with are those who fall victim to global warming.
Posted by The Mound of Sound at 12:33 PM