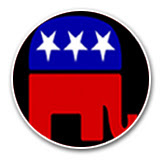 They've been flying far too close to the flame for far too long. Now, even Republican pollsters say their party may be headed for disaster, the worst since Vietnam and Nixon. From The Guardian:
"'I believe Republicans are in a more dangerous position than at any time since 1974,' said Frank Luntz, a Republican pollster and commentator. 'Back then you had Watergate. You had economic recession, a military collapse in Vietnam and had civil unrest. All those same ingredients are present today.'
"Mr Luntz said his own polling and focus group research in the first two states in the primary process - Iowa and New Hampshire - had persuaded him that most Americans are hungry for a change. That desire, he believes, is unlikely to be met by the Republican candidates for 2008. 'The Republican party seems to have lost the will to govern,' he said.
"...despite the war, the country remains evenly divided between Republicans and Democrats. Pollsters and strategists expect the 2008 elections to be as close as the last three, and the Republicans have the ability to bounce back.
"'In the last few elections, in the electoral vote column, they have almost been dead even,' said Rhodes Cook, who runs a respected political newsletter in Washington. 'Barring something unusual we will probably have another close election in 2008. So neither party is really starting in a bad position.'
The Republicans' challenge will be to hold their support in the face of what's coming in the next 18-months. The Iraq war continues to draw support away from them, certainly among the essential undecideds. Then there is the campaign underway in the Democratic-controlled Congress to get to the bottom of what the secretive Bush administration was really up to over the past six years. Tough times lie ahead for the right.

The Pew Research Centre's, "...own polls suggest that Mr McCain's forceful advocacy of a troops increase is not an issue for Republicans. Mr Doherty said: 'Among the Republicans there has been no slippage at all in support of the war over the last year, and even over the last six months. They still see the possibility of a successful outcome. They still want to keep the troops there.'