Get Real - It's NOT Rising! 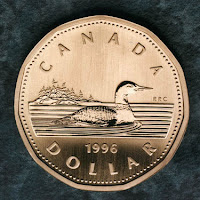 Yeehaw, the loonie is just a fraction of a cent within parity to the US dollar!

Who do we insist on saying our dollar is "rising" when it's merely treading water while the US dollar sinks?

Is the loonie rising against the Euro or the Yen or any other currency? Some maybe (Zimbabwe for example) but none that really matter. If our dollar was genuinely rising it would be rising against those major currencies and it's not so it's not rising at all.
I know, I know - it's all semantics if you're looking at hitting the outlet malls south of the line or you've been waiting to buy that Harley. Fair enough. On the other hand, if your job depends on selling stuff to Americans the reality is frightening.
Last week I was in Victoria, B.C. There was a time when Americans flocked to its trendy downtown shops in search of bargains. A lot of them came on shopping day trips via high-speed catamarans that linked Victoria and Seattle. As the US dollar declined those exchange-rate bargains became steadily less enticing and the flow of greenbacks in Victoria cash registers dried up.
Given that our economy is so dependent on American buyers, the debt-driven collapse of their dollar is hardly cause for exuberance. Oh sure they'll keep buying our oil, they can't help themselves on that score, but oil aside maybe it's time that Harpo started looking around for other prospective customers instead of trying to score political points by snubbing them.
Posted by The Mound of Sound at 8:48 AM

As an "Expert" on the Pound Stirling I can tell you (as I have many others) that the Canadian dollar has done bugger all in the last ten years against the pound. We are "pounding sand" against virtually all other currencies.
And once the oil runs out and/or Quebec seperatists heat things up (again), kiss you behind bye, bye.
Foot'

Ah yes, thank you Anon. I have long argued that our leaders ought to have at least tried to diversify Canada's trading realm to place more emphasis on Europe and Asia. Sadly, we were content to ride the prosperity train of a cheap loonie and put all our eggs in one basket.

I'll be back as soon as I find the article to link to, but the Canadian dollar is actually up in 2007 against pretty much every major currency out there (including the Euro) and our currency's rise versus the U.S. dollar is faster and more pronounced than the rise of any other G10 currency versus the greenback.

It's true that our rapid growth against the greenback is due, in substatial part, to the problems in the U.S. However, the Canadian dollar is up in 2007 against the Euro, the Pound, the Yen and the Deutschmark as well.

(First, of course, forgive the Deutschmark above, as obviously the Germans are using the Euro now, which the Canadian dollar is up against for the year).

Still haven't found the article I read earlier in the week. You can go here though and see that the Canadian dollar is indeed UP since January 2007 against the Euro, the Pound Stirling, the US$, the Australian$, the South Korean Won and the Mexican Peso. It was up and down this year against the Yen, and up quite nicely until August, when it went down a bit (interesting to see what happens for Sept!) However, overall, our Canadian currency has risen in the past 12 months against pretty much every currency out there!

Hi Kitch: Thanks for the clarification, er correction. I wonder how we'll hold up now that the greenback is falling, given that our economy is so tightly tied to America's? If the US goes into recession this time it won't necessarily be a global recession but it will certainly be a continental problem.

Weakness in the U.S. economy IS bad for us (at a point), but at the same time, China's insatiable need for oil and lumber just ain't slowing down either!

Enna Says>>>You were in Victoria and you didn't even give me a chance to buy you a latte and a chance for great conversation...shame..shame!! Cheers

Just FYI, here's another story that mentions the Canadian dollar's strength against other, non-American currencies.

The key paragraph is:

"Over the nearer term, though, the Canadian-dollar story looks brighter. This year, the loonie is up between 6% and 12% against the British pound, the yen, the euro, the Australian dollar and the New Zealand dollar, largely because of Canada's fundamental strengths."