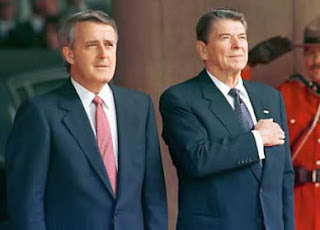 Brian Mulroney is obsessed with Meech Lake, his middle of the night gambit to put his stamp indelibly on the future of Canada. The Meech Lake Accords were, in my opinion, the stuff of a consumate snake oil salesman like this jackass. It was autocratic in the extreme, an effort by a bunch of guys hatched in the middle of the night to transform our nation without public consent. Mulroney bought everyone at the table, none more so than the premier of Quebec, Robert Bourassa.
Like all charlatans, Mulroney's pitch was founded on pure bullshit. He held Meech Lake to be the resolution of Quebec's discontent - permanently. Quebec would get the "distinct society" clause and go away happy so that we could all live in peace and constitutional contentment thereafter.
There was one key party speaking the truth throughout this sordid business - Bourassa himself. Those who bothered to listen to the Quebec premier could quickly tell that Meech Lake was the powder in the keg of a future of constitutional chaos. Mulroney assured English Canada that "distinct society" was mainly a sop to Quebec nationalism, nothing of any great consequence. Bourassa, a Quebec federalist, maintained it was a genuine and powerful constitutional transformation that would elevate his province into a state of near equality with the "rest of Canada."
Bourassa's position was born out by Quebec's position on the "notwithstanding clause." Mulroney, caught flat-footed, opined that Quebec would abandon its claims to the notwithstanding clause in exchange for Meech's distinct society clause. Bourassa said "no", Quebec would take the distinct society clause and retain the notwithstanding clause, using the two in conjunction to achieve de facto sovereignty association. Distinct society would be Quebec's sword and the notwithstanding clause would be its shield.
Despite this controversy, Mulroney continued to claim that the Meech Lake Accord would end Quebec's constitutional wrangling. This too was flatly denied by Bourassa who made it plain that Meech would merely be the beginning of Quebec's demands.
So, what did this astonishing prime minister do when confronted with these discrepancies? Did he go back to the table to sort them out before pushing the accord through? Hardly. Mulroney said he'd let the courts decide these questions later - much later, when it was far too late to undo the damage he'd inflicted.
It's not surprising that Mulroney blames Trudeau for his failures. He was a chump then and he's a chump now.
Posted by The Mound of Sound at 10:16 AM

...but it's a sound argument

You're probably right, I am disrespectful of this man. I did admire his courage on environmental issues and South Africa but on domestic issues I think he was a charlatan.