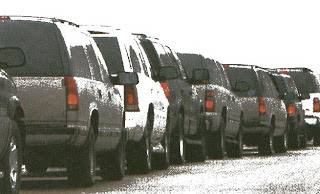 It's sad to say but I think my generation, the vaunted Baby Boomers, may some day come to be known as the "Squandering Generation." Certainly in North America, ours may be the generation that took more than it deserved and left little but problems for those to follow us.

I suppose a lot of this is simply the culmination of human nature and opportunity. Previous generations prevailed over enormous hardships and deprivations to create nations, economies and societies that enjoyed bounties unknown in the history of man and enough stability to allow us to rapaciously harvest those blessings without regard for either the past or the future.

The former editor of Harper's magazine, Lewis Lapham, attributes the demise of America's greatness to a change that began in the Nixon years in which his countrymen came to confuse wealth for virtue. Once wealth, in its own right, became the object of worship, the accumulation of this faux virtue became the national obsession. Caution was thrown to the wind along with any residual notion of posterity.

Today we have whole tracts of three, four, even five-thousand square foot houses that sit as shrines to the virtue of wealth, largely unused and yet heated and lighted and tended to as their enormity demands. We have people congesting our streets in massive, unarmoured personnel carriers for no other purpose than to drop the kids off at school or take in an afternoon of shopping at the mall or even to attend some consciousness-raising event. We are a generation gone mad.

We have turned inward, devoting our attention to what we have amassed and how we will amass even more for that is the quest in which our lives are to find purpose. By turning inward, we turn our backs on our own society and its future. We're far too busy indulging ourselves in our achievements to be bothered. Problems are to be resolved by easy payment plans or ignored altogether. Posterity is a quaint irrelevance, antithetical to the aggregation society.

There was a time when we looked to the future and actually strove for the ideal of a better tomorrow for those to come. We took real pride in imagining what that world would be like, how those generations would enjoy and appreciate what we were creating. Of course that wasn't "we" at all. That was "them", the builders, those who preceded us.

It's been decades since we stopped building for the future. Now we build for today, for us and no one else. Where's the proof of this fantastic accusation? It's right before our eyes in the undeniable fact that we live unsustainably. We take more than our share, as much as we can get our hands on, and in so doing we ensure that there will be less, much less for those who will follow us. To them we bequeath only our consequences. They'll live in the midden of our excess, a world raped of its promise and in contaminated retreat. For we are the Squandering Generation and our legacy is very nearly complete.
Posted by The Mound of Sound at 8:45 AM

Dear Sir: I found this an interesting post, a tad depressing, perhaps, but expressing a suspicion I've had for some time. Having come across this post via Progressive Bloggers, I'm impressed enough to Bookmark your blog and will be returning on a regular basis.