She Got What She Deserved 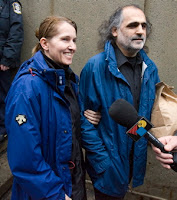 It appears that the FoxNews/Newsmax brain rot has spread to Canada. It seems to get established in the dim-witted and, once it takes hold, moves virulently through their ranks.

I see signs of it here every now and then, generally whenever I post anything about Harper, the neo-cons or global warming. That's when these goofy little comments will appear that often simply make no sense or are rooted in ignorance and bigotry.
These trolls crawled out from beneath their bridges yesterday to denounce the conviction of Myriam Bedard, the former olympian found guilty of child abduction. Fervently they attacked the justice system as a Liberal institution packed with Liberal judges who were driven to rig the trial against Bedard in retaliation for her embarrassing a former Liberal government.
Of course what these partisan dummies conveniently overlooked is that the judge (whether Liberal or PQ or even Tory) presiding over Bedard's case had very little to do with the result. It was a jury trial. Bedard's lawyers asked for that and got it. As in all jury trials, counsel on both sides had the opportunity to question and challenge jurors. They even had pre-emptory challenges if they simply didn't like the look of the potential juror.
A rigged election? Hardly. Just don't try to tell that to the trolls.
Posted by The Mound of Sound at 8:34 AM