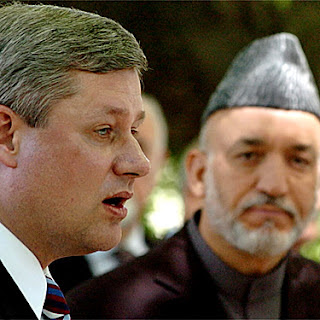 Hamid Karzai is a curious fellow. As Afghan president he remains, after six years, the de facto mayor of Kabul. His country remains seized by a civil war that his government cannot win even with the aid of the US and NATO. He implores Canada to stay and fight the Taliban even while he goes to our supposed enemy on bended knee seeking a deal, almost any deal. What if we kill the very guys he's trying to negotiate with?
Some of the best advantages the Taliban enjoy come from the Karzai government itself. It's the rampant corruption in Karzai's government and security services that spreads disaffection through the countryside, driving peasants into the arms of the insurgency. It is widely believed that both the government and its security services are thoroughly infiltrated and compromised by the insurgents.
Hamid Karzai has had more than enough time to straighten out his own government and he's failed miserably. He doesn't believe we're going to stop the Taliban, not for a minute. If he did, he wouldn't be going through back channels desperately trying to cut a deal with them.
Karzai laments that, if Canada's military mission ends in 2009, his country will descend into anarchy. Wow. If a thousand-strong Canadian battle group is all that stands between his country falling from its existing state of anarchy into - wait a minute - a bigger state of anarchy, then he needs an awful lot more help than we're giving him.
Six years is a long time to be treading water but that's all that Karzai has done at his end. It's not entirely his fault and plenty of blame for his failure rests at the feet of the White House. That, unfortunately, doesn't make any difference to the sorry state of affairs that is today's Afghanistan.
What's notable about Karzai's whining is that he deals exclusively with dire predictions of what will happen if the Canadian military mission ends. What's missing is any explanation of how his government's fate will be salvaged if we stay. The fact is it won't and Karzai knows it. That's why he's not offering to commit to anything if we stay. At best we're there as a bargaining chip to help him cut a deal with the very guys who are killing our soldiers.
At this point, whines and whimpers just aren't enough.
Posted by The Mound of Sound at 10:58 AM