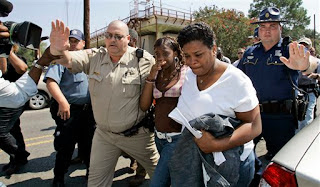 Is quiet racism an anchor around the Republicans' necks that will eventually send them straight to the bottom? Columnist Paul Krugman makes that case today in the New York Times.
No one even disputes any longer that Lyndon Johnson's civil rights legislation drove white southerners firmly into the arms of the Republican party where they today remain the party's base. The fiasco in Jena, Louisiana where six black teenagers had been charged with attempted murder following a beating sparked by some white kids who hung nooses to warn blacks not to sit under a "white" tree, has stirred the embers of southern racism.
Republican politicians, who understand quite well that the G.O.P.’s national success since the 1970s owes everything to the partisan switch of Southern whites, have tacitly acknowledged this reality. Since the days of Gerald Ford, just about every Republican presidential campaign has included some symbolic gesture of approval for good old-fashioned racism.
Thus Ronald Reagan, who began his political career by campaigning against California’s Fair Housing Act, started his 1980 campaign with a speech supporting states’ rights delivered just outside Philadelphia, Miss., where three civil rights workers were murdered. In 2000, Mr. Bush made a pilgrimage to Bob Jones University, famed at the time for its ban on interracial dating.
And all four leading Republican candidates for the 2008 nomination have turned down an invitation to a debate on minority issues scheduled to air on PBS this week.
...to get the Republican nomination, a candidate must appeal to the base — and the base consists, in large part, of Southern whites who carry over to immigrants the same racial attitudes that brought them into the Republican fold to begin with. As a result, you have the spectacle of Rudy Giuliani and Mitt Romney, pragmatists on immigration issues when they actually had to govern in diverse states, trying to reinvent themselves as defenders of Fortress America.
Krugman notes that blacks, Hispanics and Asians are turning their backs on the Republicans and strongly supporting the Democrats. Bush, in one of his brief displays of intelligence, saw how this demographic shift was threatening his party and moved to staunch the damage with his immigration bill only to see it soundly defeated by his own Republicans.
Today's Jim Crow Republicans are clinging to the rails of a sinking ship, unable to let go. When they're gone they won't be long missed.
Posted by The Mound of Sound at 9:53 AM