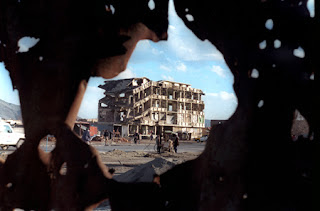 Afghan boys are being pressed into service with the Afghan National Police, various militias and, of course, the Taliban.

A report from the UN Office for the Coordination of Humanitarian Affairs states that these young boys routinely suffer physical and sexual abuse.

Abdul Qader Noorzai, head of the Afghanistan Independent Human Rights Commission (AIHRC) in Kandahar Province said, "Children are used for different purposes. The majority of them experience sexual abuse, others do all kinds of jobs such as cooking, cleaning, day patrols and even fighting."

In Kandahar Province, Canada's bailiwick, it's estimated that some 200 boys under 18 are serving with the Afghan National Police and the police auxiliary.

Under-age males have also been seen working for private security companies, particularly in Kandahar and Helmand provinces, said a senior government official who insisted on anonymity.

"The auxiliary police and private security contractors widely use child soldiers while the government and the AIHRC do not have the capacity to monitor, investigate and stop them," the official said.

Afghan officials also accuse the Taliban and other anti-government elements of deliberately using children for various military and illegitimate purposes. The Taliban use boys as foot soldiers and force children to engage in violent acts, they say.

Over 7,500 child soldiers went through Disarmament, Demobilisation and Reintegration (DDR) programmes between April 2003 and June 2006 under Afghanistan's post-Taliban peace building arrangements, according to the UN.
Posted by The Mound of Sound at 12:21 AM