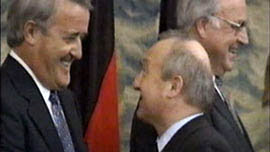 Brian Mulroney has fed the Commons ethics committee an account of his dealings with Karlheinz Schreiber that conforms with the facts he cannot avoid and yet rings utterly hollow.

Yes, it was in cash.

Yes, he decided to pay income tax on it in 1999 after Schreiber was arrested.

No, he didn't disclose his relationship with Schreiber when asked while he was under oath in 1995 because he thought they were only discussing Airbus.

Yes, he took the money as a fee for helping Schreiber help Thyssen by lobbying on the international level for the German weapons maker.

Yes, he paid tax on the entire amount ($225,000) without deducting any of the expenses he incurred in lobbying.

So, there it is - or at least there's where it is right now. But let's go back to the question Mulroney was asked and his sworn statement in answer:

Counsel: Did you maintain contact with Mr., er, Schreiber after you ceased to be prime minister?

Mulroney is stretching credulity to the breaking point to claim that this question pertained to Airbus. He isn't telling the truth. Did you maintain contact with Schreiber after you ceased to be prime minister? That question couldn't be clearer and it wasn't for Mulroney to dodge it with tortured interpretations now.

He's snagged. At the very least this warrants proceedings against him for perjury. He's certainly created a prima facie case for any prosecutor to bring to trial. Maybe he's got a better explanation that he could provide in a proper hearing but, if so, we should be able to get to the bottom of this. And, if Mulroney wasn't telling the truth to the counsel who questioned him in 1996, we know that he was lying before the ethics committee today also. And, if he was lying about this, what else is he lying about?
Posted by The Mound of Sound at 8:02 AM