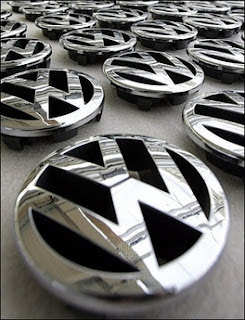 Ferdinand Porsche, that'll be Herr Doktor Porsche to the likes of you, left a rich legacy known worldwide today in the names Porsche and Volkswagen. Now his namesake company is poised to acquire a controlling interest in its much larger, lower-end sibling.

The automotive pioneer's grandson, Wolfgang, heads Porsche and soon hopes to head Volkswagen. VW, by the way, is 14-times as big as Porsche so the takeover is a Herculean chore. Wolfgang told the New York Times that uniting the companies is essential to keep VW from falling into the wrong hands:

“My father and my grandfather would have been very pleased to see this, but that wasn’t the reason we did it,” Mr. Porsche said at Porsche’s headquarters in a rare interview. “It’s a nice side effect.”

Porsche, he said, needed to bring Volkswagen into the fold to ensure that others do not get their hands on it. The two carmakers already collaborate in building sport utility vehicles and in developing hybrid engines. Porsche plans to use a Volkswagen assembly plant to stamp out the body of its eagerly awaited four-door sedan, the Panamera, due in 2009.

The takeover, which was the brainchild of Porsche’s chief executive, Wendelin Wiedeking, is intended to lock in that partnership. By acting when it did, Porsche headed off private equity investors, which it says were circling Volkswagen in 2005.