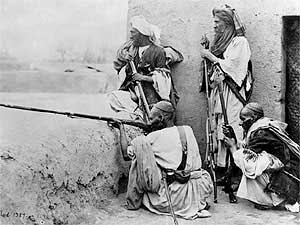 Our days babysitting Afghanistan's unresolved civil war are drawing to a close.   The big question is "what next"?   What will come of Afghanistan after Western forces leave?   According to Gwynne Dyer, it will probably be something close to what it was before we showed up.

The “Afghan National Army” is not fit for purpose, and the outcome after NATO troops leave will probably be the same whether they all go home this year or stay until 2014. So what is that probable outcome?

Karzai may not fall immediately: the $4 billion a year that NATO is promising to pay for the maintenance of his army will probably preserve the status quo for two or three years. But no more: it is most unlikely that the subsidy will be extended when it comes up for review in 2018.

That’s the way the Vietnam War ended. The last U.S. troops left South Vietnam in 1973, but the regime they left behind survived until Congress cut off the flow of military aid in 1975. It happened exactly the same way when the Russians left Afghanistan in 1989: the regime they had supported lasted three more years, until the flow of funds was cut off after the old Soviet Union collapsed at the end of 1991.

The same thing will almost certainly happen this time. Even the $4 billion that NATO is now pledging will only pay for an Afghan army two-thirds of its currently planned size. When that external funding ends, the roof will probably fall in on Karzai’s regime.

The Taliban will doubtless keep control of the Pashtun-speaking provinces where they recruit most of their fighters. (For all NATO’s efforts, they never really lost it.) The Afghan National Army will probably disintegrate and be replaced by the separate but allied Tajik, Hazara and Uzbek ethnic militias that held the north of the country before 9/11. They may be able to hold it again.

In other words, the likeliest outcome is a reversion to the pre-9/11 distribution of power in Afghanistan, perhaps with the Taliban in control of Kabul, perhaps not. That’s not a wonderful outcome, but it’s not such a terrible one either.

So what in hell was our Afghanistan war for anyway?    We've squandered enough treasure and the lives of dead and wounded soldiers that we need to ask some hard questions and demand some straight answers.

Let's begin with an examination of Canada's military leadership.   Afghanistan stands as an indictment of their very competence.   It seemed at the time and still does that top leaders, including General Randy "Big Cod" Hillier, got swept up in cowboy militarism, a chance to get Canadian soldiers into a real shooting war with their American big brothers.   Where was the prudence we should demand from our military leadership, particularly when they're consigning our soldiers to the prospect of maiming and death?

On what possible basis did Hillier think he could take over the Kandahar province combat operation with a miniscule force of just 2,500 out of which he could field just 1,000 combat troops?   Why did those numbers remain static even as the number of insurgents grew exponentially from the "few dozen scumbags" Hillier derided at the outset of "the mission"?   Why did a succession of senior officers keep claiming we had them (the Talibs) on the run, whipped, finished?   Why did Hillier & Company not realize what Gwynne Dyer observes, that the war was unwinnable from the outset?

The Western alliance has finally accepted that if the foreign troops cannot defeat the Taliban in 11 years, they are most unlikely to do so in 13 or 15 years.

The Russians could have told them that. “Our soldiers are not to blame,” General Sergei Akhromeyev told the Soviet Politburo in 1986. “They’ve fought incredibly bravely in adverse conditions. But to occupy towns and villages temporarily has little value in such a vast land where the insurgents can just disappear into the hills.”

According to the Pentagon’s own numbers, each American soldier in Afghanistan costs about $1 million a year. Pashtun teenagers, eager to show their worth fighting against the foreigners, can be had for about $200 a month each—and there is an almost inexhaustible supply of young Pashtun males. The war was unwinnable from the start.

Even if our military and political leaders can be somehow excused for not knowing this war was unwinnable at the outset, there is no excuse for not realizing that brutal and blatant truth by 2008 when Parliament voted to extend the mission to 2011.    Lives lost in an unwinnable war are lives squandered to political expedience and military ticket-punching.

Why do we need a thorough, painfully honest post-mortem on Afghanistan?   Because our role as America's Foreign Legion is only beginning and the trust relationship between our political and military leadership needs an overhaul.   We need a reaffirmation of the "Canada First" defence policy and we'll not achieve that by acting as though we're a branch plant operation for Home Office in Washington.

We need to keep a critical eye on the Department of National Defence.   In the United States the Pentagon now vies with the State Department in shaping foreign policy.   Think that couldn't happen here?   All you need do is think F-35.   The F-35 our forces want so desperately is an offensive weapon, a supposedly stealthy light intruder bomber.   The role the Americans have in mind for the F-35 was laid bare in their recent "Operation Chimichanga" exercise.   The F-35 is what you use to attack China and that's it.   As a defensive weapon it's virtually useless with limited range, payload and mediocre agility and speed not to mention very questionable reliability.

We need to accept Afghanistan for what it is, our first failed, foreign war.   We lost, they won, simple as that.   We had all the King's horses and all the King's men and the latest and greatest in artillery, attack helicopters, tanks, jet fighters and drones.    They had a fraction of our strength and fought us to the quitting point using Korean-war vintage assault rifles and RPGs wielded by illiterate farm boys.  We lost and we never really had a hope of winning.

Militarism in the United States is out of control.  If the lives we lost and ruined in Afghanistan are to have any meaning, it should be realizing what can befall nations that get drawn into the new American militarism.
Posted by The Mound of Sound at 2:08 PM