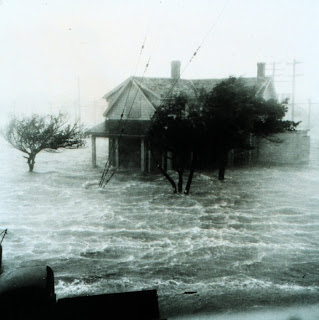 When writing about environmental calamity descending on the United States one must resist the urge to resort to "they had it coming."  Yes, America has been a huge and to date insurmountable obstacle to any meaningful global consensus on fighting climate change.  Yes, that's especially true for the American south and its "heartland" of the mid-west, the areas plagued by protracted drought or cyclical droughts and floods.  But, still...

Americans are coming around.   They are accepting the reality of climate change although they're much less accepting of the link between what is happening and the root cause of global warming.  And, according to new research, a lot more Americans along their Atlantic coast are going to "get it" very soon.

"Sea level rise is accelerating three to four times faster along the densely populated east coast of the US than other US coasts, scientists have discovered. The zone, dubbed a "hotspot" by the researchers, means the ocean from Boston to New York to North Carolina is set to experience a rise up a third greater than that seen globally.

"Asbury Sallenger, at the US geological survey at St Petersburg, Florida, who led the new study, said: "That makes storm surges that much higher and the reach of the waves that crash onto the coast that much higher. In terms of people and communities preparing for these things, there are extreme regional variations and we need to keep that in mind. We can't view sea level rise as uniform, like filling up a bath tub. Some places will rise quicker than others and the whole urban corridor of north-east US is one of these places."


"'Coastal communities have less time to adapt if sea levels rise faster," said Stefan Rahmstorf, at the Potsdam Institute Germany, who published a separate study in the same journal, Nature Climate Change, on Sunday. Rahmstorf's team showed that even relatively mild climate change, limited to 2C, would cause global sea level to rise between 1.5 and 4 metres by the year 2300. If nations acted to cutting carbon emissions so the temperature rise was only 1.5C, the sea level rise would be halved, the researchers found.

"The impacts of the rising seas are potentially devastating, said the scientists. "As an example, 1 metre of sea level rise could raise the frequency of severe flooding of New York city from once per century to once every three years," said Rahmstorf, adding that low lying countries like Bangladesh are likely to be severely affected. His colleague Michiel Schaeffer, at Wageningen University in the Netherlands, said: "Sea level rise is a hard to quantify, yet a critical risk of climate change. Due to the long time it takes for the world's ice and water masses to react to global warming, our emissions today determine sea levels for centuries to come."

Sea level rise is expected to introduce a phenomenon new to North America, that of "internally displace persons" or IDPs.   We have learned to associate the term with populations of war-ravaged countries like Iraq or Afghanistan that migrate out of conflict hotspots to safer locales within their own countries.   In North America, sea level rise resulting in flooding, storm surges, coastal erosion and saltwater inundation; combined with megadrought in the south and the exhaustion of groundwater resources, is expected to render large regions, some of them heavily populated, less habitable or even uninhabitable, giving rise to internally displaced populations.   This challenge will arrive at roughly the same time as the U.S. has to confront climate migration heading north out of Central America and Mexico.   Whether northern or southern hemisphere, climate migration will be polar oriented.

And what of Canada?  Is it realistic to expect this magnified sea level increase to halt at the Canadian border?   What does it hold for the Maritime provinces?  Do we need to prepare for some degree of population relocation - on both coasts.

The flooding underway on British Columbia's Fraser River is a harbinger of things to come.  59 per cent of the B.C. population is resident in the Lower Mainland, most of which is the low-lying Fraser River estuary abutting the rising sea.   Large parts of built-up municipalities such as Richmond are already below sea level.  This region is faced with a witches' brew of climate change challenges - heavy winter snowpacks and early Spring thaws; ground level subsidence; meltwater flooding; sea level rise and the associated threats from storm surges and saltwater inundation.   In other words, even as the population of the Lower Mainland continues to burgeon, climate change impacts just beginning to appear will make it increasingly difficult to sustain large population loads.   These changes will also make it increasingly difficult to weather the mega-earthquake expected to hit the region sometime within this century.

These are challenges that Harper's emasculated EnviroCan is left to kick down the road to await some future government that puts Canadians, including the coming generations, ahead of our fossil-fuel revenue addiction.
Posted by The Mound of Sound at 9:38 AM

We need not worry about rising sea levels, because North Carolina has legislated against them. I am confident that the ocean has enough respect for the law of North Carolina to not be in violation, aren't ya'll?