Does the West's Swing Right Portend Trouble Ahead?

What good can come of this?

It's safe to say that Ronald Reagan would be unacceptable to today's movement conservative Republicans.   Richard Nixon would today be denounced as a socialist.

We have had the same march to the Right.   The NDP is quietly discarding and burying its socialist roots to transform itself into an electable liberal party.   The Libs have turned Conservative Lite.  The Conservatives, like moulting snakes, have discarded their progressive skins to propel themselves well past the bounds of traditional conservatism and into the realm of secretive authoritarianism.

The radical far right is also on the march in Europe.   A nazi-style movement has gained a political toehold in Greece.  Le Pen's movement played an unseemly role in the last French run-off.   And, with the rise of the far right, anti-semitism is resurgent. 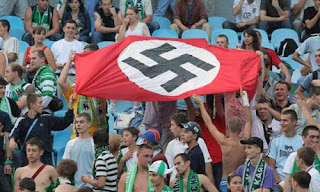 The rise of the radical right in Canada and the U.S. plays out in ways far different but no less troubling.  We're clinging to Pax Americana in ways eerily reminiscent of the Cold War.   This time, however, it's China being cast in the role of the former Soviet Union.   The Free World naval exercise, RimPac2012, is about to get underway and, this year, Canada's military presence will be second only to America's.

Her Majesty’s Canadian Ship (HMCS) Victoria will be the first Victoria Class submarine to participate in the exercise. Other Royal Canadian Navy units include HMCS Algonquin, Ottawa, Brandon, Saskatoon and Yellowknife. Two teams from Fleet Diving Unit (Pacific), including a dive team and the Explosive Ordnance Disposal Section, are also participating.

More than 150 soldiers from the Canadian Army’s 2nd Battalion Princess Patricia’s Canadian Light Infantry will work with the United States Marine Corps and other coalition units in an exercise to practice the evacuation of non-combatants.

Taken in isolation, RimPac is merely just another of the biennial wargames that date back to 1971.  But that would ignore the context that this year's exercise holds.   The United States now confronts a powerful economic and geopolitical rival with a rapidly growing and modernizing military force subordinate only to America's and Russia's armed forces.

The Bush Doctrine, not expressly rescinded by Obama, reserves to America the right to use military force against any nation or group of nations that threaten to overtake US military or economic supremacy.   If that sounds like real hillbilly stuff, it is, and the hillbillies have all the guns.

America has announced a "pivot" in its global military posture to China's doorstep.   US naval forces in the Atlantic will be reduced by 20% which will be transferred to its Pacific fleet.   US ships will be repositioned via forward basing arrangements with friendly Asian countries.   Defense Secretary Leon Panetta has been in Vietnam looking to get a deal to lease America's former naval base at Cam Ranh Bay.

And Canada seems to think we should get in on the act.   DefMin MacKay is negotiating forward basing rights with Singapore, presumably for naval and air force units, especially units that might soon be flying F-35s.

The first Cold War was started quite deliberately in response to Soviet aggression in eastern Europe and a very real threat to western Europe.   Cold War II, it seems, will be far more obscure in purpose but potentially just as dangerous.   And it seems that the powers of the far right are backing us into it.   (By the way, I'm claiming copyright over both "Cold War II" and "CWII".)

I'm left with this awful feeling that there's nobody at the wheel this time.   The ReformaTories have a demonstrated preference for brinksmanship over statesmanship and justly deserve to wear the mantle of failure for our futile adventure in Afghanistan.   Will they plunge Canada headlong into a Far East Cold War (FECW)?  Is there anyone who can steer us safely out of an unnecessarily quagmire that could bleed us for decades?

My greatest fear of CWII is that large-scale conflict could be ingrained as self-fulfilling prophecy.  It's not defensive or responsive so much as it is provacative.   The first Cold War at least achieved a measure of stability but that took time and a degree of confidence-building.   This time our posturing is different, more aggressive, more in our adversary's face.   Why?
Posted by The Mound of Sound at 8:59 AM

It seems to me, Mound, that the Powers That Be suffer from terminable certitude.

Those with real military experience -- like Eisenhower and Kennedy -- understood the limits of hard power, and were therefore susceptible to doubt.

The folks in charge these days lack that experience.

That's why I think I'm voting Green next time.