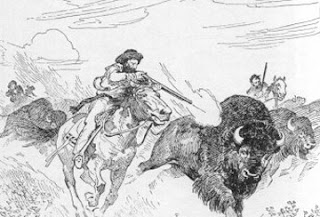 America's historic bread basket, the Great Plains, is just about finished.   Like the Canadian prairie, the Great Plains was a massive expanse of grassland inhabited by migratory creatures and native tribes that moved with them.

Then the white man showed up. 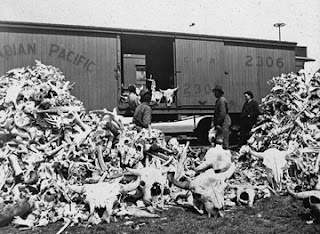 First to go were the buffalo, next the Indians.   The buffalo were killed off.   The Indians that weren't killed off were herded onto reserves out of the way.   Settlers showed up and discovered that beneath their feet lay the giant Ogallala aquifer just waiting for those enterprising white folks to have at it.   And so they did.   And with that free, seemingly limitless water they transformed that barren grassland into first class farmland yielding bountiful harvests of wheat and corn and just about anything else they chose to grow.   America began to feed the world.

It was a shiny example of the "can do" spirit only, in reality, it was more like the "do can" spirit.  We "do" because we "can."   There's a big difference between the two.   That's becoming obvious today from the Dakotas to Texas.   The Ogallala is just about pumped out.   The settlers turned farmers took the waters because they could and nobody much worried that the day might arrive when they couldn't.

The July issue of Harper's magazine has Wil Hylton's piece, "Broken Heartland, The Looming Collapse of Agriculture on the Great Plains."  Here are a few excerpts:

"Sprawling beneath eight states and more than 100 million acres, the Ogallala Aquifer is the kind of hydrological behemoth that lends itself to rhapsody and hubris.   Ancient, epic, apparently endless, it is the largest subterranean water supply in the country, with an estimated capacity of a million-billion gallons, providing nearly a third of all American groundwater irrigation.  If the aquifer were somehow raised to the surface, it would cover a larger area than any freshwater lake on Earth - by a factor of five."

"It wasn't until the 1940s, when a variety of new technologies coalesced on the plains, that large-scale irrigation sprang up for the first time - but from there, the transformation was quick.   Within a decade thousands of wells were drilled, creating a spike in productivity as unprecedented as it was unsustainable.  Land that had been marginal became dependable; land that was dependable became bountiful...

"No one worried about the aquifer.  To farmers it seemed a bottomless reserve, generating the same outlandish volume no matter how many straws went in.   Soon there were hundreds of thousands of wells producing the same reliable flow, year after year, without any evident stress.

"Then, during the early 1990s, farmers throughout the Great Plains began to notice a decline in their wells.  Irrigation systems from the Dakotas to Texas dipped, and, in some places, have been abandoned entirely."

"...For complex reasons involving wind, weather and soil composition, the Ogallala does not recharge in the way one might expect.   In fact, of the eight states above the aquifer, only Nebraska, with its sandhill dunes, is permeable enough to contribute any serious replenishment."

Almost a quarter of the reservoir is now down to less than 30-feet of water remaining.   By 2030 most if not all of the rest will be in the same state.   With crop irrigation draining the reservoir between five to eight feet a year, the math is ugly.

"...Although many cities on the plains have grown, rural communities across Kansas, Nebraska, Montana and Texas, Oklahoma and the Dakotas have shrunk each decade since the Great Depression.  In Kansas alone, more than 6,000 towns have vanished altogether.   Nearly a million square miles of the American heartland currently meet the definition of 'frontier' used by the Census Bureau more than a century ago."

What lies in store for America's breadbasket?  Vast tracts are being turned into windfarms.   Once bountiful farmland is being returned to grassland for grazing.  Experimental crops are being developed, perennial varieties of wheat and sorghum that will be self-seeding but without the high yield of conventional crops.   Bison are making a comeback.   Beyond that, no one seems to know.
Posted by The Mound of Sound at 9:23 AM

"In fact, of the eight states above the aquifer, only Nebraska, with its sandhill dunes, is permeable enough to contribute any serious replenishment."

Those being the sandhill dunes that Keystone would like to run a pipeline through, yes?

Sickening. I'm trying hard to be hopeful that enough of us will come to our senses in time.

As we continue to push a wide variety of ecosystems into failure and collapse, it's becoming clear that eventually humanity will no longer be able to sustain itself as a species and it, too, shall collapse. Will it go extinct? Likely not, but its population will be dramatically and significantly reduced. Ironically, it will be our disappearance that willl allow the Earth to flourish again, but with the likelihood that it will never again see the rise of an industrial or technological species since so many of the resources to produce them will have been permanently exhausted.

@ Karen. We will come to our senses but the second part, "in time", remains doubtful. A growing majority of the American public now accepts the reality of climate change but they still have trouble connecting it to global warming. They get sea level rise, they get the cyclical floods and droughts, they get the south's mega-droughts but they don't get what's actually causing it and they certainly reject the solutions needed to address it.

@ Neil - I think our ability to avoid outright extinction rests mainly on our prospects for avoiding total war. The world is armed to the teeth and very much adrift in uncharted waters.

There are reports now that air,water and soil contamination in China has so degraded their ecosystem that is has left the country unable to sustain a population of more than 700-million. That leaves Beijing with half a billion people too many. How does an emerging economic superpower cope with an internal challenge of that magnitude?

"That leaves Beijing with half a billion people too many. How does an emerging economic superpower cope with an internal challenge of that magnitude?"

The fact that this population is gender skewed to the point that there are millions of males who won't be able to find wives (Unless reverse matriarchal Mormonism takes root)- itself a good reason to join the army, go to war, and maybe rape the women of the enemy - one way to leave spawn.

It's chilling to think of what solution will be involved if 500 million Chinese people are considered surplus to requirements.

As an aside and being in NS, I can say that it is very dry and cool out here and I much prefer wet weather. :)

I can't remember a spring this dry. No slugs in the garden to speak of but the plant life needs a drink.

@ Koot. Yeah, as we've grown the human population from 2.5 to 7+ billion in just my lifetime, we've supersized problems beyond all human experience or imagining. Few realize the scope of it but we're sailing in uncharted waters in so many ways. In some ways it seems, to me at least, that we now exist in a giant, environmental Ponzi scheme.

@ Stewart. Coming off a mild, relatively snow-free winter, a dry spring in NS must be disconcerting. I suppose part of that may result from back to back La Ninas. For what it's worth, the Americans think an El Nino may now be forming.

As for China, I think the current managenment is finding the population issue an enormous threat to their grip on power. A leading Chinese economist recently advocated a two-state solution. Hive the country into poor (a billion or so) and rich (the remaining 200-million). The suggestion is based on the sensible argument that there are nowhere near enough resources to float all boats in China yet that small sector of people capable of driving China's economic ascendancy need to be rewarded with Western-style standards of living. It's a conundrum also besetting India. The carrot is obvious enough. What no one wants to mention is the stick - state repression - needed to keep the "have nots" in line.

Just imagine how big China's problem would be if it weren't for the "one child" policy. At least if they can hang on past the hump, their population is actually expected to start shrinking. The gender skew, while it points to an annoying sexism, actually helps some in terms of trying to shrink the population.
Meanwhile it's interesting to realize that, like many Western leading economists, leading Chinese economists can also be idiots.

Actually, we might not have to imagine how bad it would be--I suspect that's about how big India's problem will actually be, since as I understand it their population shows no signs of stopping its growth and they have no significant policies in place for managing the situation.