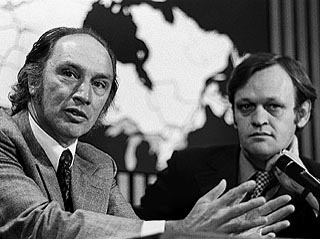 Many Liberals, displaying the stubborn arrogance that moved their party from Sussex Drive to Stornoway to Motel 6 in just three election cycles, are fawning all over Justin Trudeau as a party leadership frontrunner.

I'm sure he's a fine fellow, one of many fine fellows within the Liberal ranks, but I'm far from convinced he's cut from the same cloth as his father.   He strikes me as far more Margaret than Pierre.  And, if the Libs are to come back, the party needs another Pierre, not necessarily another Trudeau.   The Ottawa Citizen has it nailed.

"The most successful Liberal prime ministers in recent memory — Jean Chrétien and Pierre Trudeau — were always themselves, warts and all. They were men with visions for the country and they asked people to accept it, or not."

"...Whoever wins the race to be the next Liberal leader should take that victory as permission to go into the next election as himself or herself. The party has to stand for something; therefore, it has to be led by someone with a personality and a vision. It no longer has the luxury of occupying the mushiest possible middle and being whatever the person on the other end of the handshake wants it to be."

Trudeau seems to be intelligent and articulate. I think he could be a good leader if he surrounded himself with smart people.

He couldn't be any worse than the mailroom clerk/Preston Manning fart catcher/Tom Flanagan clone that currently resides at 24 Sussex.