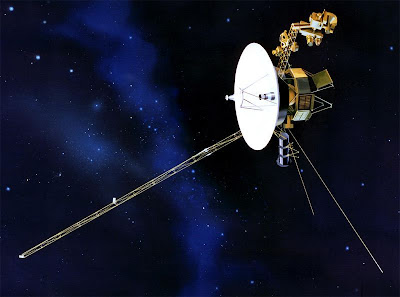 It's been hurtling through space since May 5th, 1977.   Now, almost 35-years later, NASA's Voyager 1, has made it through our solar system.

Voyager completed its intended mission 30 years ago but somehow it just kept working, measuring and recording and relaying its data back to earth.   And it's still going.   Although some of its sensors are shutting down as their nuclear power source is nearing exhaustion, Voyager is expected to remain in radio contact with NASA until 2025.   It is so far distant now that its messages take 16 hours to reach Earth.
Posted by The Mound of Sound at 9:20 AM

Email ThisBlogThis!Share to TwitterShare to FacebookShare to Pinterest
Labels: voyager 1