A Word of Caution. 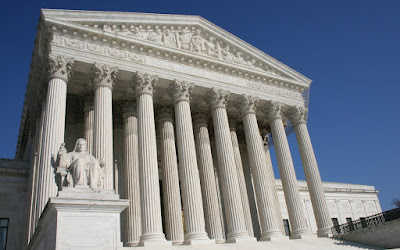 Roberts, Alito, Thomas, and especially Scalia - shameless political stooges the lot of them.

While many Americans and wellwishers in other lands celebrate today's US Supreme Court decision effectively extending same sex marriage to every state without exception, it was nonetheless a 5-4, split decision.  A 5-4 split on an issue as plain as this.  That's worrisome.  A little more stacking of that bench with another Scalia or Thomas could theoretically reverse today's decision, perhaps on the pretence of states' rights - you know, the same guise used to launch the Civil War.

It's nice to think "there's no going back now" but that may be just whistling past the graveyard.  This is 21st century America, something the 'founding fathers' would probably find unrecognizable.  Jesus Christ on a Crutch, this is the country that has abandoned habeas corpus.  It is the Land of Liberty where today even its very own citizens can be swept up and imprisoned indefinitely with neither charge nor trial. It's the nation where the president has assumed the power to execute US citizens by drone strikes.  It is the land of Total Information Awareness where everyone is spied upon by both government and the commercial sector.  This is the land where democracy and the political process has been subordinated to the forces of market fundamentalism, neoliberalism and corporatism.

This is not a place where same sex equality before the law is secure on the strength of a 5-4 split decision.  Sorry.  Maybe with time and a major demographic shift, political, civil and human rights may be restored.  Maybe not.

That is very sad but what can be done when people like Trump are wanting a stint in the White House....its related in that there are so many Trumps running around. It seems there are many of those found in the courts of the US. I agree, it is the 21st Century but there are those who want to return to guillotine times. A little off topic here, but want to mention it. As you are aware, we voted the NDP in AB. Well, now the PM in Ottawa is acting like a little spoilt baby again and funding for subsidizing rents for poor people hasn't found its way to AB this month. (Joey Smallwood used to do that same sort of thing.) How disgusting is that and one does not have to wonder why things are going to hell in a hand basket what with religious beliefs, social beliefs and who in North America deserves reward. Often, I feel very sorry for those of us who believe in democracy.

Yeah, first thing I did when I saw the decision was go surf around looking for the vote. 5-4 ain't secure at all. And what's worse is that the righty-tighties will be in no mood for mercy should they get their majority back on the court. They could easily be vindictive enough to declare all same sex marriages null and void as well.

I did not think about that Mound, thanks for pointing it out. I should have realized that when the neoliberal, religious right, intellectually bankrupt courts present legislation, the legislation ,if they don't agree with it, can be changed by the new kids in power.

I think your analysis is a bit pessimistic.Sixty percent of Americans now support same sex marriage. As do eighty percent of those between 18 and 29. So the future looks brighter than you might imagine.

Really, Anon? What percentage of Americans favour an assault weapon ban and how well has that turned out? You might want to hold that thought until this fall when a study is due to be released by Princeton that tracks how rarely the public will is reflected in the legislative record. It is said to leave no doubt that democracy in that land has fallen to what's called "political capture". It's a disturbing trend sweeping much of the West, the rise of illiberal democracy in which you still get to vote but it simply doesn't matter. It's the product of two things, the decline in individual rights and the dismantling of restraints on government. Can you say "surveillance state"?