Meanwhile, In Our Vast, Undefended North... 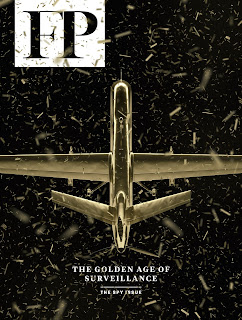 The latest issue of Foreign Policy magazine is devoted to espionage, spying, and the magazine reports that today's Ground Zero of spying is the Arctic.

For the countries that border the Arctic Ocean— Russia, the United States, Canada, Norway, and Denmark (through its territory of Greenland)—an accessible ocean means new opportunities. And for the states that have their sights set on the Lomonosov Ridge—possibly all five Arctic Ocean neighbors but the United States—an open ocean means access to much of the North Pole’s largesse. First, though, they must prove to the United Nations that the access is rightfully theirs. Because that process could take years, if not decades, these countries could clash in the meantime, especially as they quietly send in soldiers, spies, and scientists to collect information on one of the planet’s most hostile pieces of real estate.

While the world’s attention today is focused largely on the Middle East and other obvious trouble spots, few people seem to be monitoring what’s happening in the Arctic. Over the past few years, in fact, the Arctic Ocean countries have been busy building up their espionage armories with imaging satellites, reconnaissance drones, eavesdropping bases, spy planes, and stealthy subs. Denmark and Canada have described a clear uptick in Arctic spies operating on their territories, with Canada reporting levels comparable to those at the height of the Cold War. As of October, NATO had recorded a threefold jump in 2014 over the previous year in the number of Russian spy aircraft it had intercepted in the region. Meanwhile, the United States is sending satellites over the icy region about every 30 minutes, averaging more than 17,000 passes every year, and is developing a new generation of unmanned intelligence sensors to monitor everything above, on, and below the ice and water.

If Vienna was the crossroads of human espionage during the Cold War, a hub of safe houses where spies for the East and the West debriefed agents and eyed each other in cafes, it’s fair to say that the Arctic has become the crossroads of technical espionage today. According to an old Inuit proverb, “Only when the ice breaks will you truly know who is your friend and who is your enemy.”

...Canadian Prime Minister Stephen Harper declared that Santa Claus is a Canadian citizen and announced plans to claim ownership of the North Pole. “Canada has a choice when it comes to defending our sovereignty over the Arctic,” Harper had said in a 2007 speech at a naval base outside Victoria, British Columbia. “We either use it or lose it. And make no mistake, this government intends to use it.” The idea, according to Harper’s “Northern Strategy,” is to assert Canadian presence in the Arctic by “putting more boots on the Arctic tundra, more ships in the icy water and a better eye-in-the-sky.” 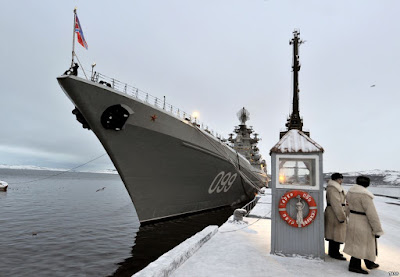 ...Over the past few decades, [Arctic countries] have happily assumed something akin to Arctic squatters’ rights, taking special liberties to explore the ocean’s bounty while simultaneously expanding control, both mechanical and human, as the ice continues to shrink. With or without a U.N. decision, the Arctic countries likely aren’t budging anytime soon.


...Russian President Vladimir Putin views the far north in a vehemently nationalist light. “The Arctic is, unconditionally, an integral part of the Russian Federation that has been under our sovereignty for several centuries,” he said in 2013. To put muscle behind this statement, in March 2015 the Russian military launched a massive five-day show of force in the Arctic involving 38,000 servicemen and special forces troops, more than 50 surface ships and submarines, and 110 aircraft. Two months earlier, the first of about 7,000 Russian troops began arriving at a recently reopened military air base at Alakurtti, north of the Arctic Circle; 3,000 of them will be assigned to an enormous signals intelligence listening post designed to eavesdrop on the West across the frozen ice cap.

More than a dozen additional bases are slated for construction. In October 2014, Lt. Gen. Mikhail Mizintsev, head of the National Defense Management Center, told the Russian Defense Ministry’s public council that Moscow plans to build 13 airfields, an air-to-ground firing range, and 10 radar posts. Russian Defense Minister Sergei Shoigu informed the council, “In 2015 we will be almost fully prepared to meet unwelcome guests from east and north.” 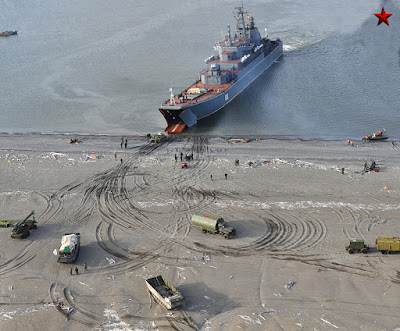 ...Norway is also becoming nervous about Russia. In March 2015, around the same time that Moscow showed off its 38,000 troops, Norway acted similarly, dragging out 5,000 soldiers and 400 vehicles for its own Arctic military exercise. But rather than spying on Russia with satellites, Norway is putting its spies to sea. In December 2014, Prime Minister Erna Solberg christened the $250 million Marjata. Built for the Norwegian Intelligence Service and expected to become operational in 2016, the vessel will be among the world’s most advanced surveillance ships, according to information released by the Norwegian military. 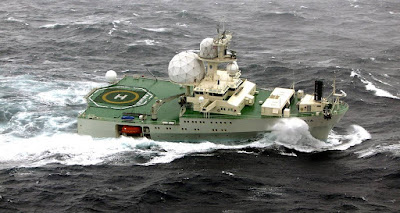 With 72 subs, the United States has an advantage in numbers over Russia, which has about 60. But Russia is debuting a new generation of vessels that are far quieter and much more difficult for U.S. defense systems to detect. According to an article in the U.S. Naval Institute’s Proceedings magazine, the “alarmingly sophisticated” Russian fleet “will likely dramatically alter the world’s future geopolitical landscape.” The author, veteran submariner Lt. Cmdr. Tom Spahn, said the armament on the Yasen, Russia’s new fast- attack submarine, includes supercavitating torpedoes that can speed through the water in excess of 200 knots, about the equivalent of 230 miles per hour. This “makes her truly terrifying,” Spahn wrote. The new Russian subs, that is, will be stealthier and far deadlier than any ever known. 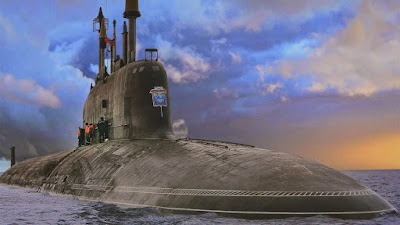 One evening in November 2014, U.S. radar operators spotted six Russian aircraft—two Tu-95 “Bear” long-range bombers, two Il-78 refueling tankers, and two MiG-31 fighters—heading toward the Alaskan coast. They had entered a U.S. air defense identification zone, airspace approaching the American border where aircraft must identify themselves, and they were getting closer when two U.S. F-22 fighter jets were dispatched to intercept them. About six hours later, Canada detected two more Russian Bear bombers approaching its Arctic airspace. Like the United States, Canada scrambled two CF-18 fighter jets to divert the bombers within about 40 nautical miles off the Canadian coast. 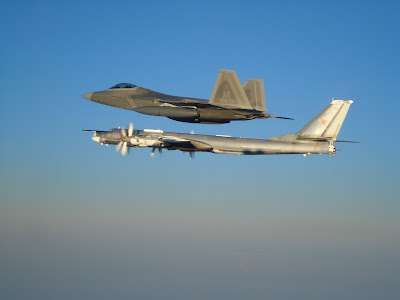 Although the Bears are designed to drop bombs, they are also used to collect intelligence and eavesdrop on military communications. This was most likely their purpose in flying close to the U.S. and Canadian Arctic coasts. To be clear, Moscow wasn’t doing anything Washington doesn’t do itself: The United States regularly flies its RC-135 aircraft—a variant of a Boeing 707 that sucks signals, from radar beeps to military conversations to civilian email, from the air like a vacuum cleaner—near Russia’s northern territory. 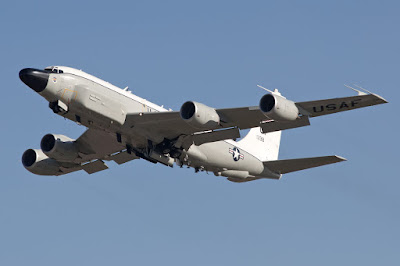 If Harper is planning to blunt Putin's sharp elbows he's going about it in a curious way - defunding the armed forces, degrading the readiness of the navy, air force and army alike.  Canada's military budget has plummeted to just 0.89% of GDP and our 'missions' to the Baltics and the ISIS air war eat up a good chuck of that.

In other words it's Vlad Putin's military muscle versus Harper's hot air. Harper was on the money when he said that we have to exercise our sovereignty in the north or risk losing it.  That, however, was 2007, before the Great Recession. Harper was presiding over a government he inherited from the Libs with a balanced budget and money in the bank.  That was before he began defunding the government and degrading the readiness of all of our military forces - army, navy and air force.  Today his focus is on pipelines and jury-rigging government revenues and expenses to create the illusion of a balanced budget before Canadians choose their next government.

When NATO stages Arctic air exercises and Canada is a "no show", we're running on fumes which is music to the ears of a guy like Putin.
Posted by The Mound of Sound at 6:26 AM

I expect international law to decide not military buffoonery.

Who has the best claim on the Arctic ? Probably Russia - Canada's Arctic coast stops at Alaska. Canada's territorial claim is next. Who has the least ? Either Norway or the US.

After long and difficult diplomacy, everyone will probably get their 200 mile share with the middle around the pole remaining international waters. The big winner will be Russia. Their Arctic coast will be ice free decades before Canada's and they already have more arctic development than Canada will have in the foreseeable future. By the time Canadian arctic waters are navigable, global shipping will be accustomed to using Russian routes, ports and communications.

Russia will prevail with luck and planning not military posturing.

"includes supercavitating torpedoes that can speed through the water in excess of 200 knots, about the equivalent of 230 miles per hour. This “makes her truly terrifying,” Spahn wrote."

Truly terrifying — especially for the Russian sailors, because the torpedo is essentially an active rocket at launch (where the gas for the supercavitation comes from), and rockets can explode. It all boils down to Russian build quality.

Aside from that, the Russian build-up is another reason why Canada needs to get with the follow-on to the USN X-47B hunter/killer drone. It has 2X the range of an F-18 and when we lose one, we don't have to call for SAR we don't have.

@ Rumley. I so hope you're right but we can't count on it. Russia is desperate for those resources and means to have what it considers its due. There have been plenty of indications that Russia may take what it wants and leave us to fume and spit.

Hi, Ed. I recall a few years ago CBC broke the story of how Canada got three of these Shkval torpedoes which were taken for testing at the Whiskey Golf underwater range just a few miles down the road from my place. Who knows how they fired the damned things because they're way too big for standard Western torpedo tubes. I read somewhere that in recent years other countries have developed their own supercavitating torpedoes. If I recall correctly, the Chinese have developed a variant specifically for use against American fleet carriers.

I see the merits of your smart stealth drone idea especially since the X-47B recently demonstrated a solid, in-flight refueling capability.

What has Canada ever done, in all our history, to assert dominion other than neglect and kill off the inhabitants of the place?