Seriously... Really? Just When You Thought You Had Heard it All. 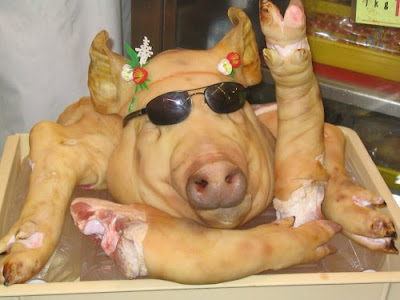 Chinese customs have seized around 3 billion yuan ($625 million) worth of smuggled meat, some more than 40 years old and rotting, the official China Daily said on Wednesday, the latest in a grim series of food safety scares.

Beijing toughened food safety rules in April to shake off a reputation for safety scandals that range from donkey meat tainted with fox DNA to milk contaminated with industrial chemical melamine that killed at least six infants in 2008.

Chinese authorities have launched a crackdown on beef and frozen meat smuggling, in addition to a campaign last year to stamp out the smuggling of farm products.

Customs officials found some of the meat was more than 40 years old, meaning it dated back to the 1970s. Other parts were rotten and decomposing, the China Daily newspaper said. It was not clear if the seized meat had been destroyed.

Industry sources say hundreds of thousands of tonnes of beef is being smuggled into China via neighbouring Hong Kong and Vietnam, from countries such as Brazil and India, to sidestep Beijing's import curbs.

Meat can last for a long time if continuously frozen, but smuggled meat is often moved under poor storage conditions that lead to repeated thawing, making it eventually go bad.

"To save costs, smugglers often hire ordinary vehicles instead of refrigerated ones. So the meat has often thawed out several times before reaching customers," Yang Bo, an anti-smuggling official in Changsha told the paper.

And there, kids, is your little culinary horror story for the day.
Posted by The Mound of Sound at 9:00 AM

Along with the dog meat festival stories lately and I've completely lost my taste for Mets Chinois.

Welll . . . it makes me wonder about going to China and eating there, but as long as I'm at home I'm not finding the association strong enough to put me off what amounts to staple food where I'm from.

Lived for a time in China. You can't miss dog when it is served to you. It has a texture all its own...like horse meat.

Hmmm, yummie! Make mine the retriever with a 100-year old egg and a slice of 40-year old pork loin.

No joking....I'm happy you got my drift!