It's the Greybar Hotel for Deano Del 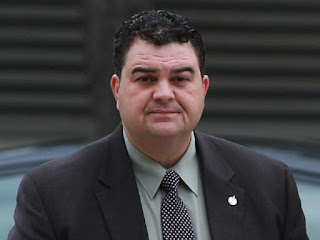 Dean del Mastro won't have to worry about buying groceries for the next month. He's been given a month-long, all expenses paid visit, probably to some minimum-security guest ranch followed by four months house arrest.  That's Harper's former spokesman and ex-MP's reward for fiddling with his election expenses in the last runoff.

DdM has also been given 18-months probation.

It's hard to say what Deano will do once he's paid for his crimes.  In the Tory camp there's not a lot open to jailbirds except a tour in the PMO.  Then again, consorting with slumlords, low rent drifters and shady characters like Steve Harper might be a breach of his parole.

Apparently DdM will only be spending one week in the slammer.  That's about how long he'll need just to get his lard ass in and out of a hammock.

The parade of tough on crime lawbreakers keeps getting longer, Mound.

Not long enough, Owen, not nearly long enough. Notice how many of those Tory senators that voted to expel Duffy and Wallin for their high crimes and misdemeanors have changed their tune now that they've been fingered for the same larceny? Now they're all demanding "arbitration."

We need a constitutional amendment. Whenever a government-appointed senator gets the Criminal Code Pox, the opposition should get to appoint his/her replacement. That'd smarten up that dumbass prime minister.

He will probably land some cushy job somewhere and no one will ever remember.

Why only one week in the slammer, Mound? Does he already get time off for good behavior or what? Read the CBC story and it did not mention the reduced jail time.

Lorne, over at Politics and Its Discontents picked up on the one week imprisonment, Anon.

The question is, why is it Harper keeps putting these kinds of people in power???

Modern "movement conservatism" attracts a certain type of individual to the political Right, Anyong. Harper does his best to surround himself with those of his own political stripe, people like Poilievre and del Mastro, who can be relied upon to follow orders.