Oh Why Did I Buy this Damned Book, Why? 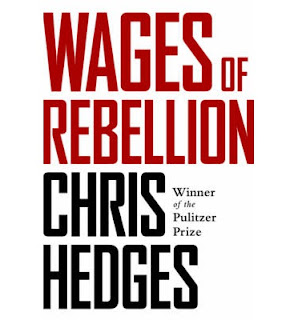 I purposely leave my copy of Chris Hedges new book Wages of Rebellion, the Moral Imperative of Revolt on my breakfast table.  It suits me to take it a few pages at a time over a light lunch and then set it aside for another day.

This is what I took in over a BLT today.  See if you recognize yourself in any of it.

Clive Hamilton, in his 'Requiem for a Species: Why We Resist the Truth About Climate Change' describes the dark relief that comes from accepting that 'catastrophic climate change is now virtually certain.' This obliteration of our 'false hopes' requires not only intellectual knowledge but emotional knowledge, which requires us to accept that those we love, including our children, are almost certainly doomed to insecurity, misery, and suffering within a few decades, if not a few years, is much harder to acquire.  To emotionally accept the impeding disaster, to attain the visceral understanding that the power elite will not respond rationally to the devastation of the ecosystem, is as difficult to accept as our own mortality.

The crisis before us is the culmination of a 500-year global rampage of conquering, plundering, exploiting, and polluting the earth - as well as killing by Europeans and Euro-Americans of the indigenous communities that stood in their way. The technical and scientific forces that created unparalleled luxury and unrivaled military and economic power for a small, global elite are the forces that now doom us.  Ceaseless economic expansion and exploitation has become a death sentence. But even as our economic and environmental systems unravel - thirteen of the fourteen warmest years since weather record-keeping began over a century ago have occurred in the opening years of the twenty-first century - we lack the emotional and intellectual creativity to shut down the engine of global capitalism.

Anthropologists, including Joseph Tainter in 'The Collapse of Complex Societies,' Charles Redman in 'Human Impact on Ancient Environments,' and Ronald Wright in 'A Short History of Progress,' have laid out the familiar patterns that lead to the breakdown of complex societies, which usually collapse not long after they reach their period of greatest magnificence and prosperity. 'One of the most pathetic aspects of human history is that every civilization expresses itself most pretentiously, compounds its partial and universal values most convincingly, and claims immortality for its finite existence at the very moment when the decay which leads to death has already begun,' Reinhold Niebuhr wrote.

The last days of any civilization, when populations are averting their eyes from the unpleasant realities before them, become carnivals of hedonism and folly. Rome went down like this. So did the Ottoman and Austro-Hungarian Empires. Men and women of stunning mediocrity and depravity assume political control. Today charlatans and hucksters hold forth on the airwaves, and intellectuals are ridiculed. Force and militarism, with their hypermasculine ethic, are celebrated. And mania for hope requires the silencing of any truth that is not childishly optimistic.

...Our major preoccupation is pleasure. Margaret Atwood, in her dystopian novel 'Oryx and Crake,' observes that as a species 'we're doomed by hope.' The mantra is to be positive, to be happy. This mania for optimism - for happiness - leads to fantasy being mistaken for reality. Reality is dismissed when it is unpleasant.

'We hardly dare face our bewilderment, because our ambiguous experience is so pleasantly iridescent, and the solace of belief in contrived reality is so thoroughly real.' Daniel Boorstin writes in 'The Image: A Guide to Pseudo-Events in America.' 'We have become eager accessories in the great hoaxes of the age. These are hoaxes we play on ourselves.'

So basically, it's the same as everything else Chris Hedges has written.

Yes - prescient, realistic and unvarnished. Good of you to notice.

I think his bit on the emotional journey we have to take to get anywhere with this mess is of utmost importance. I love his take on "sublime madness": "This curious mixture of gloom and hope, of defiance and resignation, or absurdity and meaning, is born of the rebel's awareness of the enormity of the forces that must be defeated and the remote chances for success" (219).

Things are really really bad and so many of us are in such deep denial that it's hard to maintain hope that we'll muster the energy to look it in the eye and rise up to fight back - a fight that is largely against our own selves and our obsession with conveniences. Seeing him speak and reading his books give me a bit of hope. At the very least it makes me feel a little less weird for continuing to try to convince people things have to change immediately.

Yes, I see it constantly. Good people, conscientious people who try to do right by everyone, never turn away a canvasser, sort their recycling, at least somewhat active in their communities, who seem to wilt when it comes to these existential challenges.

I wonder how much of this is the conditioning to which we're all subjected from dawn to dusk, our social reduction.

We've been transformed into taxpayers instead of citizens even as we're evolving (especially in the US) a form of transactional government reminiscent of Rome's last years of greatness. Our bonds to our government are being weakened and, to some extent, shredded. We are returning to a form of "political capture" of the
Tammany Hall era. This subtle and hardly understood change in status from citizen to taxpayer might be a harbinger of a return to something resembling feudalism.

The Harper government manipulates us with fearmongering and appeals to our basest instincts while its persistent resort to rigid control, secrecy and deceit prove that it has no interest in advancing much less defending democracy in Canada. Harper dines on wedge politics and cultivates deep societal division trusting he'll cleave just enough of the plebs to give him a good chance of majority.

It's hard to fault a populace so methodically reduced for failing to find the courage to rise to meet challenges that are so obviously enormous.

I have long opined that the degree of social cohesion we can muster in the coming decades will be one of the most influential factors in how Canadians weather the challenges of this century. Yet it's this very social cohesion that the Prince of Darkness strives relentlessly to dismember.

I go through various manifestations and combinations of the Kubler-Ross cycle daily, even hourly.

To the extent possible it behooves us to enjoy what remains.

The miseries will look after themselves.