Is This a Battle We've Already Lost Without Knowing It? 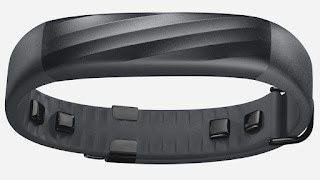 Okay they're listening and I've unwittingly let them in my house.

We were somewhat troubled to learn, several years ago, that certain game consoles had cameras that could allow others to watch what people were doing without them knowing of it.

Now I might have fallen for something along the same lines.  I've developed a heart issue that is somewhat sleep related.  I read about this fitness tracker plus thingee offered by Jawbone, the UP3, that has additional sensors that monitor, record and report things such as resting heart rate and detailed sleep data according to light, deep and REM sleep and waking intervals.

The software is amazing. It provides daily reports on activity, exercise, sleep, heart rate and such. These stats are then crunched into weekly and monthly summaries.  All this info is stored in "the cloud" for up to five years or at least you can supposedly access five years of your own data.

The other morning I woke up parched and immediately downed two glasses of water.  When I looked at the morning UP3 summary, I was surprised that my resting heart rate was a good bit higher than normal.  My smartphone app then went on to conclude that I had probably become dehydrated and urged me to drink 8 glasses of water that day.  I have to say I was pretty impressed.

The Cloud.  That's a network of remote servers and that's about all you'll ever know about them.  They're supposedly secure but don't tell that to the celebrities who risque selfies were hacked and then leaked online.

Now I'm not particularly worried.  I don't see how anyone would be interested in my health data or could possibly benefit by stealing it.  That said, I think others could be quite vulnerable.  Employers are becoming more focused on the health of their workers or those applying for openings.  What about insurers?  They really want that information and they don't have a great reputation for being too scrupulous about getting it.

Some months ago my daughter received an invitation through Amazon Prime (US) to purchase an Amazon Echo device at half price.  These are apparently much sought after.  She wasn't interested but she thought it would be great for me, living alone and all. 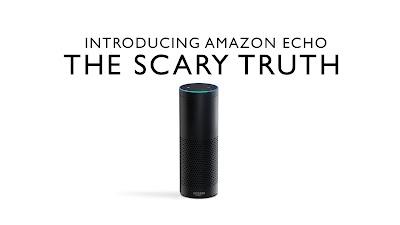 It's a black cylinder sort of thingee that operates by voice command.  Some of its functions resemble iPhone's Siri or Android's "Okay Google."  You can ask it things like directions to some destination or trivia such as who won the 1956 World Series and it spews out the info.

The Amazon Echo goes a few steps beyond.  You might turn your smartphone off to save battery power between charges but the Echo is plugged in so it's always on.  You activate it by saying its name "Alexa."  It has a wonderful voice synthesis technology that doesn't sound robotic.  You can ask Alexa for information.  If you're cooking you might need to know how many grams in an ounce or how many teaspoons in a tablespoon, that sort of thing.  Trivia is a specialty.  Whose faces are on Mt. Rushmore, that sort of thing, or who succeeded Joseph Stalin - your sense of curiosity is the limit.  It'll summarize the latest news, give you the local weather, tell you want time it is in Dublin or Tokyo.  It has a bluetooth speaker so it'll play whatever music you request, handy when you're doing something time consuming like making a batch of ravioli.

Amazon, of course, is a mega retailer so it's not surprising that Alexa can make up shopping lists.  "Alexa, put paper towels on my shopping list."  Done.  Then, when you're ready to go the shopping list is on your cell phone and you're away to the races.  Once you set up an account with Amazon, Alexa can also order directly from Jeff Bezo's outfit.  "Alexa, order Pears Soap from Amazon Prime." After that you just wait for the parcel to show up at your doorstep.

It all sounds too good to be true and it probably is.  Your communications with Alexa can go out via bluetooth and wind up somewhere in the Cloud.  I'm damned sure Amazon will be logging everything you put on your shopping lists, building up your consumer profile to target you for advertising.

What would happen if you began each morning with "Alexa, how can I contact al Qaeda?" or "Alexa, what household ingredients are required to make explosives?"  In this era of total information awareness is there some computer out there, maybe a horde of them, scouring the ether for these sorts of buzzwords, identifying the source, adding them to watch lists?

The thing is, I'm not sure Alexa and I are going to have a wonderful relationship. I might just wind up having to drown her in the bathtub - not that I would know anything about that sort of thing you understand.
Posted by The Mound of Sound at 12:02 PM

Just what do you think you're doing, Dave?

Cool, but a little creepy.

Great reference, Marie. Science fiction does seem to have a way of becoming reality, doesn't it? This stuff is cool and, yes, it's a little creepy.

It sort of makes me wonder if it's time to pull up stakes and build that little remote cabin up the coast.

Hey, did you check out that CBC video clip on Lesquiti Island. I'm sure those hippies would welcome you with open arms.

It's still in my inbox. Marking with a fury these days.

I have a cunning plan to not buy one (or a cellphone either, or even a cool device capable of telling me when I'm thirsty; I might just muddle through trying to figure that out by myself).