Here's your hat, what's your hurry? Don't let the door hit your ass on your way out. 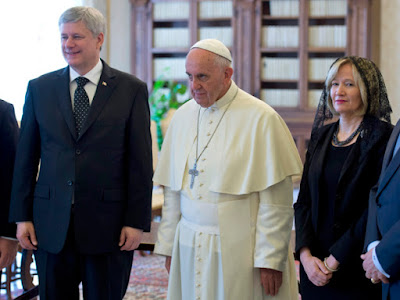 10 minutes?  That's not an audience with the Pope.  It's a drive by.  Yet Canada's world renowned prime minister was ushered in - and out - of the Pope's chambers in what must be a record for brevity, a scant ten minutes.

Maybe the Pope just knows the Devil when he sees him.  Old Beelzebub after all doesn't have a whole lot in common with Pope Francis.  The Pope is focused on climate change and the threat it poses to our civilization, especially the poor and vulnerable.  In another week the Vatican will release the Pope's encyclical calling on Catholics to act.  Steve, however, isn't Catholic and his climate change focus is on making life a living hell for those same poor and vulnerable.  At least he didn't get the Pope's door slammed in his face.

Even the obligatory photo op was a bust.  Francis is the pope who always seems to be smiling.  Not this time.  The picture is a bit cringeworthy, right down to Sideshow Steve's forced smile.

It looks like Francis found the whole exercise a waste of his time.

It's probably always like this when fantasy worlds collide

When you consider that the Pope would have to say a few words to the Mrs. out of politeness, and the time to pose and take the photo, I would say Steve got something like all of 5 mins. to talk to him. Lol.

Harper looks awkward. Pope Francis looks impatient to get the whole thing over with. I don't think Mound, the international world think much of Harper.

The look on Pope Francis' face suggests to me that he has Harper's number, Mound.

Okay, Willy, you win for best comment ever. Your gold star is in the mail.

Lureen must have known this was going to be a grim affair given her decidedly funereal outfit.

I found photos of Harper with a positively beaming Pope Benny "The Rat" Ratzinger, he of the Wehrmacht. Those two seemed to hit it off just fine. A progressive Jesuit like Frankie, not so much.

how would premier CC, of BC ,do?

What makes you think he cares, Anyong?