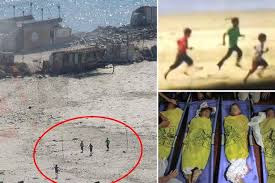 Israel has officially absolved itself of any wrongdoing in the murder of four Palestinian kids killed on a Gaza beach last summer.

The kids - they were children - had a soccer ball in play when an Israeli patrol boat opened fire on them with explosive shells. Unfortunately, for the Israelis, foreign journalists witnessed the slaughter.

The New York Times’s Pulitzer prize-winning photographer Tyler Hicks, who witnessed the incident, though from a different angle to the Guardian, wrote in a blog at the time: “A small metal shack with no electricity or running water on a jetty in the blazing seaside sun does not seem like the kind of place frequented by Hamas militants, the Israel Defence Forces’ intended targets.
“Children, maybe four feet tall, dressed in summer clothes, running from an explosion, doesn’t fit the description of Hamas fighters, either.”
Oh well, it was only four kids and, besides, they were Palestinian kids, worse yet they were Gazans.  All three Canadian parties supported Israel's "Dahiyeh" campaign against Gaza that saw civilians butchered by the hundreds so what's four kids in the greater scheme of things?
And, yes, those are news photos of those kids (the three who survived the first round) running for safety just seconds before they too were killed.
Posted by The Mound of Sound at 10:18 AM

I recall when this happened, one photographer said the kids had caught his eye. He thought how wonderful it was that, in the midst of the ongoing carnage, a few kids could still go to the beach and kick around a soccer ball. I think the first photo, with the oval, shows the four kids out in the open, playing, just before the Israeli gunboat opened up on them. The picture at the top right shows the surviving three desperately running for their lives while an Israeli gunner adjusts his sights.

I really hope Mound that Palestine is successful in it's attempt through the ICC to charge Israel with war crimes. I can't get my head around murdering 4 boys, playing soccer.

Israel's routine rampages against the civilian population are now called "mowing the lawn." It's war crimes policy even has a name: Dahiyeh.

The telltale signs that Israel was launching a Dahiyeh campaign against the civilian population of Gaza last summer was that it opened with air attacks to destroy the water, power and sewage systems. Those targets are expressly off limits under the laws of warfare. The Israeli pattern then moves onto hospitals, schools and, finally, residential neighbourhoods.

It wasn't just Harper who supported this. So too did Junior, following dutifully in the footsteps of Ignatieff. Mulcair was onside too until, eventually, he sensed the winds had changed and so did he.

Just finishing teaching a course in the Canadian Citizenship requirements to ESL students here in Alberta. Most of the students are refugees. One happened to mention Palestine. I asked the question, "do you think Palestine ought to have its own home land"? The answer was, "it is their own fault they don't have a country of their own". The subject was changed. Just mind boggling is all it is.

And those children did not deserve to have their lives taken. Just a shame.