Dear Steve, Don't Go Down in History as a Mass Murderer

It'll be millions, that's for sure.  More likely many hundreds of millions.  If you add in collateral events such as war, it could well end up in the billions.  Nobody really wants to pin the tail on that donkey, the one representing 4 degrees Celsius of global warming.

Yet that is the future that proponents of high-carbon fossil fuels would bequeath us, a world of chaos and mass death of unprecedented, unimaginable scale.  Here in Canada we've got those very people running the place or waiting in opposition to replace them and pick up where they leave off.  You can think of them as diabolical plague rats.

Look at this picture. 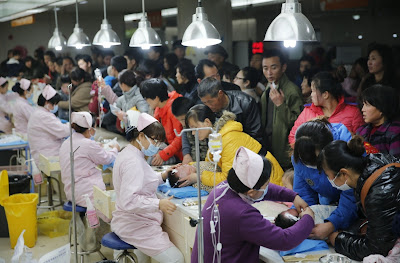 In a way it resembles photos of Chinese factory workers assembling iPhones only the product here is infants.  They're being treated for respiratory illnesses at the children's hospital in Xi'an, China.  Ever see such a thing?  If we don't stop Harper and the rest of the Tar Sanders on Parliament Hill on both sides of the aisle, maybe some day you will.

Germany's climate change centre, the Potsdam Institute, with the sponsorship of the World Bank, recently presented an excellent online course exploring what awaits us in a world beset by 4C warming.  There are plenty of reasons that's not discussed in polite company.  It is certainly not fit for dinner table conversation.

A report just issued by the British medical journal, Lancet, in conjunction with London's UCL (possibly the best university you've never heard of) concludes that climate change threatens to wipe out half a century of advances in global health (see photo above).

“We see climate change as a major health issue and that it is often neglected in the policy debates,” said Professor Anthony Costello, director of the UCL Institute of Global Health and co-chair of the commission.

“On our current trajectory, going to 4C [of warming] is somewhere we don’t want to go and that has very serious and potentially catastrophic effects for human health and human survival and could undermine all of the last half-century’s gains. We see that as a medical emergency because the action we need to do to stop that in its tracks and get us back onto a 2C trajectory or less requires action now – and action in the next ten years – otherwise the game could be over.”
Game over, indeed.

There are only two camps, an we're all in one or the other.

One camp accepts science and fact, especially in the face of such an overwhelming scientific consensus on climate change.  It recognizes the enormity of the challenge and the incredible sacrifices necessary to meet it.

The other camp is for denialism.  There are the active denialists who reject the scientific consensus on the strength of belief as well as those who have personal interests to defend.  There's also another group in the denialism camp, the really large group who simply find climate change far too ominous and overwhelming to accept and who, instead, either ignore it or grasp for nonsensical responses about how the Earth has always warmed and cooled, it's all a scientific conspiracy and a massive hoax, or global warming has stopped.  Another substantial element just can't deal with it.  It's more than they can handle.  There are plenty of Liberals and New Democrats in this last subsection. Theirs are the votes that will keep the plague rats in power.

Of course as Canadians we'll be the last and least affected by the ravages of climate change.  We've got our own "sin eaters" - the poorest and most vulnerable in the most hard scrabble corners of the world.  They didn't accept that role but our prosperity prescribes it for them.  Can't be helped.  I suppose.

The worst can still be avoided but it's going to demand real sacrifice.  We'll have to decarbonize our economy and our society.  Not in 40 years, not in 20 years. We have to start now beginning with our highest carbon fossil fuels and a major clean energy initiative to replace that energy source.  By some estimates we've got 10 years left to make this happen.

While we're at it, we're also going to have to tackle our rampant consumerism and over-consumption.  Has to be done. Our concept of GDP has to give way. We have to break the chains that shackle us to perpetual, exponential growth. We have to discover that we can live smaller and actually enjoy a better, happier life.

Once we're committed to moving forward with decarbonization and a new mode of consumption that substitutes quality for volume, then we will finally be able to engage the global community on the issue of overpopulation.  We probably need to get our numbers down to around 3.5-billion and there are safe means to do that within just a generation or two.  There are plenty of other ways to get that result also but haven't we had enough killing?

But if we're not willing to do these things, and I expect we're not, then let's stop pretending that we're liberal much less progressive.  You can't be a progressive only when you're immersed in comfort and ease.  Being a progressive demands a willingness to do the necessary and right things even when they aren't easy and aren't comfortable.

Oh I don't believe that, Owen. I think he's paying attention. He has to if he's going to derail any effective action on these problems. His recent success at the G7 is proof. It's what you expect from plague rats.