An Economic System Incompatible With Life on Earth. Time to Move On to Something Better. 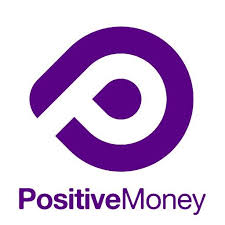 The only thing that troubles me about this is having to say it yet again - our addiction to perpetual exponential growth is not survivable. It is lethal. It will end us. This road only leads one way. That's what happens when you have just one, very finite planet, a single biosphere, Spaceship Earth.

Think of it as a lifeboat that's designed to hold 30 people. Maybe it can hold 50 people if the water is calm enough but our leadership, political and corporate, insist they can squeeze 90 or 100 in it. That's where we're at today.

Jason Hickel, an anthropologist at the London School of Economics, thinks it may be time to revive an idea that traces back to Chicago in the 1930s.

When it comes to global warming, we know that the real problem is not just fossil fuels – it is the logic of endless growth that is built into our economic system. If we don’t keep the global economy growing by at least 3% per year, it plunges into crisis. That means we have to double the size of the economy every 20 years, just to stay afloat. It doesn’t take much to realise that this imperative for exponential growth makes little sense given the limits of our finite planet.

Rapid climate change is the most obvious symptom of this contradiction, but we’re also seeing it in the form of deforestation, desertification and mass extinction, with species dying at an alarming rate as our consumption of the natural world causes their habitats to collapse. It was unthinkable to say this even 10 years ago, but today, as we become increasingly aware of these crises, it seems all too clear: our economic system is incompatible with life on this planet.

...The most obvious answer is to stop using GDP to measure economic progress and replace it with a more thoughtful measure – one that accounts for the ecological and social impact of economic activity. Prominent economists like Nobel Prize winner Joseph Stiglitz have been calling for such changes for years and it’s time we listened.

But replacing GDP is only a first step. While it might help refocus economic policies on what really matters, it doesn’t address the main driver of growth: debt. Debt is the reason the economy has to grow in the first place. Because debt always comes with interest, it grows exponentially – so if a person, a business, or a country wants to pay down debt over the long term, they have to grow enough to at least match the growth of their debt. Without growth, debt piles up and eventually triggers an economic crisis.

Hickel believes that debt, or rather an economy in which currency is based on debt, is the culprit.

This might sound a bit odd, but it’s quite simple. When you walk into a bank to take out a loan, you assume that the bank is lending you money it has in reserve – money that it stores somewhere in a vault, for example, collected from other people’s deposits. But that’s not how it works. Banks only hold reserves worth about 10% of the money they lend out. In other words, banks lend out 10 times more money than they actually have. This is known as fractional reserve banking.


So where does all that additional money come from? Banks create it out of thin air when they make loans – they loan it into existence. This accounts for about 90% of the money circulating in our economy right now. It’s not created by the government, as most people assume: it is created by commercial banks in the form of loans. In other words, almost every dollar that passes through our hands represents somebody’s debt. And every dollar of debt has to be paid back with interest. Because our money system is based on debt, it has a growth imperative baked into it. In other words, our money system is heating up the planet.

His solution is to switch to a debt-free currency. 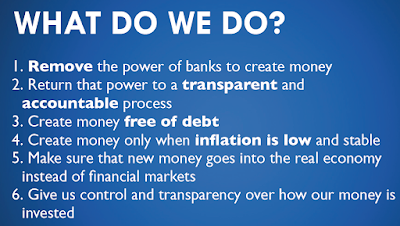 Instead of letting commercial banks create money by lending it into existence, we could have the state create the money and then spend it into existence. New money would get pumped into the real economy instead of just going straight into financial speculation where it inflates huge asset bubbles that only benefit the mega-rich.

...This is not a fringe proposal. It has been around since at least the 1930s, when a group of economists in Chicago proposed it as a way of curbing the reckless lending that led to the Great Depression. The Chicago Plan, as it was called, made headlines again in 2012 when progressive IMF economists put it forward as a strategy for preventing the global financial crisis from recurring. They pointed out that such a system would dramatically reduce both public and private debt and make the world economy more stable.

What they didn’t notice is that abolishing debt-based currency also holds the secret to getting our system off its addiction to growth, and therefore to arresting climate change. As it turns out, reinventing our money system is crucial to our survival in the Anthropocene – at least as important as getting off fossil fuels. And this idea is already beginning to gain traction: in the UK, the campaigning group Positive Money has generated momentum around it, building on a series of excellent explanatory videos.

I think Hickel may be reaching a bit in his argument that a change in economic systems is the secret to arresting climate change. The reform model he champions could contribute significantly to changing our lethal extraction, production, consumption, waste cycle that is indeed harming the planet but it won't be a magic wand. Where I cannot disagree with him is his observation that our current economic system is incompatible with life on Earth. 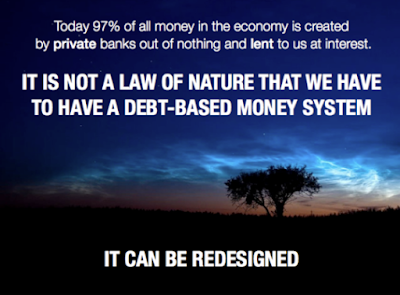 Ir's interesting that some solutions -- like the electric car -- have been around for a long time, Mound. But entrenched interests have done their best to keep them buried.

There was an old farmer / rancher out west named Ed Deak (not to be confused with the professor of the same name) who after studying and commenting upon the “economy and economists” for many years put forward the view that ''Wealth is the temporary control of energy. Wealth can not be created, only taken from other sectors, the environment, or the future.'' . This view (with which I agree) is increasingly being shown as correct. It is well worth reading some of Eds many articles at The Tyee and elsewhere, Ed has since passed but is missed by many who read his considerable number of articles on this subject - see http://thetyee.ca/News/2015/08/01/We-Miss-You-Ed-Deak/. Its worth looking up his personal history, this was a common man with an uncommon amount of common sense and with a very low opinion of “economists”!


Predictably enough, Anon, you have no better suggestion. All you do is whinge. You must have an exciting life.

Thanks for the link, Rural, I'll check it out.

@ Owen - there are forces, powerful vested interests, that stoutly impede progress almost at every turn. Remember how GMC bought up all the electric trolley producers?

If money is nothing but credit to be payed by future generations are carbon credits nothing more than new attempts to create credit and the status quo?
Or am I just missing something?

TB, I suppose that might depend on whether carbon credits are negotiable instruments, directly convertible to cash. I really don't know enough about them.

Meanwhile, International Trade Minister Chrystia Freeland was on CBC this morning blathering about how great the European trade deal is and how progressive the investor state resolution process is.

What she means by "open society" is beyond me.

Govt thinks CETA will grow GDP. They're desperate to grow the GDP, it's their primary goal.

Hugh, Toby - the problem I see is that we're light years away from having this essential conversation on growth. There's not a party in Parliament that doesn't embrace growth. It's become their orthodoxy and they show now interest in looking behind it. Perhaps they fear succumbing to economic apostasy.

It feels very much like a ponzi scheme, which don't tend to end well.


Hugh, I think it's somewhat akin to a Ponzi scheme in that we're stealing from our younger generation and the three or four to follow to prop up excessive consumption today.

Excess consumption of renewable and nonrenewable resources, like the overpopulation crisis, is not part of the political consciousness. We have largely capitulated on both fronts, our best efforts nearly exhausted with the climate change challenge alone and in isolation.

The evidence is as tangible, palpable and concrete on these other existential threats but we deliberately ignore them. Why? Because acknowledging these threats would trigger some very unwelcome questions about population control and, worse, how we are to allocate or ration commodities (wealth) that are as scarce as they are essential. Could you imagine a leader seeking re-election on a platform to reduce his voters' standard of living by 40% or more? We prefer to stick with the tried and true alternatives - famine, plagues, pestilence and war. Sorry but that is the real default option.