Russia and the GOP Have the Same Goal for America - Chaos - Or How We Know Who'll Win the American Election - Trump, No. Clinton, No. Putin, Of Course. 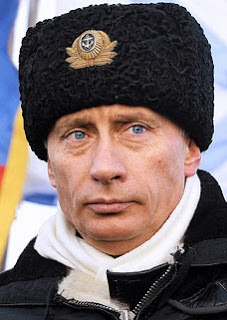 Republican Congressional leaders have been pretty outspoken about one thing - if Hillary Clinton wins the presidency, they plan on making the gridlock that beset the Obama administration even worse, much worse. They will plunge the government and, to some extent the country itself, into chaos.

The desired result in this election has not necessarily been the presidency of Donald Trump. In fact, he seems to them to be rather disposable. The mission is sowing disruption, chaos. And in doing that, Putin will have accomplished something for himself, regardless of who wins next week: a deeply fractured American system, once held up as a shining alternative to Moscow’s style of power, now tarnished beyond recognition.

Even more importantly, Putin will have shown himself to be able to project power far beyond where anyone would have suspected. It’s no longer just in his backyard, like in Georgia and Ukraine — not even in the Middle East. Putin is now able to bring his tactics of asymmetric warfare deep into the belly of his greatest foe, the world’s last superpower. “Putin wants to show himself as a player who can’t be forced to do what America wants and that he can do what he needs, whether the others like it or not,” says independent political analyst Masha Lipman. “Today, everyone understands that you might not like Russia, you might hate it, you might be scared of it, you might want to punish it, but you can’t do anything about it. It can do what it wants."

“If Trump wins, of course they’ll drink champagne in the Kremlin, but not for long,” says former Putin advisor and political analyst Gleb Pavlovsky. “Then they’ll realize that nothing is resolved and that the election of Trump will lead to more chaos. But that’s what we’re selling — chaos.”

If Clinton wins, Putin won’t mind that he’ll be dealing with a president who had to climb over a mountain of Kremlin propaganda and interference to get to the White House. Bitter? Fine. But at least you’ll know that we’re stronger than you thought. “How can it be a regional power if it was the central topic of the third debate?” Markov asks.

“It doesn’t matter who’s president,” Lipman says. “Any kind of turmoil or internal split that’s hard to overcome, that is good for Russia. If your powerful opponent is disabled from within, it works to your advantage.” It also greatly undermines a central tenet of U.S. foreign policy, one that has driven Putin to distraction: democracy promotion and the idea that striving toward American values is a force for positive change in the world. “‘They said our elections are no good, but look at their elections, look at this much-touted democracy,’” Lipman says of the Russian view. “That is much more important than a single person.

A good hypothesis but one that can and likely will kick back.
Whoever wins the presidency will be under scrutiny by the US courts for dastardly deeds done!
Clinton is under investigation and Trump goes to court for fraud charges.
Both will be looking for a diversion a false flag moment perhaps.

Putin, meanwhile, is doing a remarkable job in Syria regardless of the constant red baiting of the western media.
If Putin can pull this off we will be seeing a very different world.

What?
"a central tenet of U.S. foreign policy... democracy promotion and the idea that striving toward American values is a force for positive change in the world."
THE central tenet of U.S. foreign policy (for the last 75+ years)is to make sure that the EMPIRE remains undisputed world hegemon.
No wonder Putin (and Xi Jinping) might be pissed off.
The rest of the world, when asked to jump, will only ask how high.
Qaddafi and Saddam were among those few who refused to jump...
A..non

What a bunch of nonsense. Putin is not the problem. The Wikileaks were not part of some "commie plot" to take over the world.

Time to drain the swamp of all this nauseating corruption, every last bit of it. What a filthy mess!


Ah, an anonymouse back with the "drain the swamp" meme. Really you are rather silly. "Putin is not the problem." Who said he was? The problem is with the Republicans, Trump's party, who have shown no hesitation at crippling their own government. Hard to blame Putin for taking advantage of that and, with the assistance of the GOP, that's exactly what he's doing.

Unfortunately this appears to be "western" media BS.

This is becoming a Bay of Pigs in reverse. Promises made to Gorbachev in 1989 are being ignored. Yeltsin was a drunkard pushover - Putin ... not so much.

Qaddafi and Saddam were among those few who refused to jump...
A..non

Those two made the unfortunate decision to try and sell oil in other currencies rather than the USD$$.

The world we live in is revolting (no pun intended) against the establishment not really knowing who the establishment is!
Most people do not consider the actions of the World Bank, the IMF etc who really do control the world around us.
How do you fight or control such institutions?

What's fascinating is Putin's actually done very little. He's made comments concerning Trump, and his hackers have been at work in the USA, but that's probably relatively normal in the course of history. Spies have always been hard at work, whatever the age.
Really, it's his specter that is doing all this. The stories of him are doing more to effect chaos into US politics than he's actually ever done.
I just hope all this doesn't somehow back us into a war with Russia, accidentally. I'd prefer if the Dems and the Repubs cooled down their rhetoric.
Not likely to happen, though. A hundred years of conditioning probably doesn't disappear in a single generation.

The human race does not deserve to exist!
30

@ Troy - I wish this could be fixed by the Repubs and Dems cooling down their rhetoric but I fear it's gone far past that. Hyper-partisanship is now systemic. Republican infighting has shown that he who declines to go full Berserker is apt to lose his nomination to a contender far more radical and, if that person intends to seek another term, that mentality has to prevail in every vote. Any sign of weakness - reason/decency - is enough to see you turfed.

A perfect example of this is the degradation of John McCain who has had to give up his "moderate for a Republican" approach and willingness to reach across the aisle to adopt a full blown tea party posture. The Republicans have become a radical movement with some vicious tendencies. The establishment types have succumbed to the extremists' demands and it's hard to see how they could ever reclaim their party as a mainstream conservative party.

Basically I am talking about the overall idea that Putin is bad for the world and is going to invade ... somewhere. Unfortunately, it's been the us and its allies/NATO that's been doing the invading - both covertly and overtly. Time to wind down the rhetoric.

there is opinion that Russia who used to back leftist groups around the world has now switched to far right support. As you say, the goal is chaos in NATO, NAFTA, the EU etc. Farrage, Lapine, Trump et al are seen by the Kremlin as agents of internal division through sexism, racism and ultra nationalism .

UU4077 - this isn't about Russia doing anything particularly underhanded much less aggressive. It's Putin, the judo artist, positioning his country to take advantage of America's internal instability. He's not destabilizing the US, he has no need for that. The Republicans are doing that for him and have been doing that increasingly over the past 8-years. It's now all they seem to know how to do. The Republicans bitch and whine about America's decline and then obsessively precipitate that very result.

BTW, I've dusted off my textbooks from the last couple of war studies courses I took. I'm not saying we're headed that way but we are pointed in the right direction.

I think you're right, Rumley. Russia no longer cleaves to a narrow band of the political spectrum. Instead they see opportunity wherever weakness surfaces and use it, more at home than anywhere else, to bolster their government's popularity while secondarily exploiting the weakness and decline they perceive in their main adversary.

Anyong>>>There lies China as well. Waiting to reap the rewards of the next US President.

. . . Except Putin didn't do anything, and what he seems to want above all else is not an America in chaos (bit of projection there on the part of whoever wrote that, I think--Americans' knee-jerk response to anyone who causes them problems is to throw them into chaos, so Putin must work the same way). To the contrary, Putin seems to want a more orderly US, one which is less of a loose cannon and accepts a few more constraints from the international order. One that uses diplomatic influence more and guns less. One capable of making deals and following through on them--Russian diplomatic circles seem to have concluded since the Americans broke that Syrian cease-fire deal that the problem isn't merely that the US is untrustworthy, it's that the independent operation of different branches and factions leaves the US literally incapable of forming an agreement without defaulting on it. They think whatever faction, even that of the head of state, arrives at an agreement, other factions will undermine it (I would argue that this does not apply to agreements to give money to bankers and similar). This is an effect of American governance already being chaotic; the Russians have if anything had it up to here with American chaos.