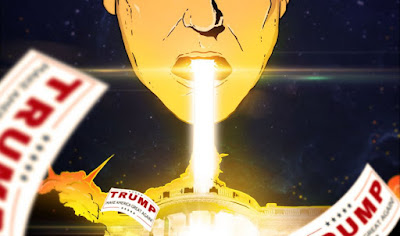 AmeriKa's president, Donald Trump, will not be the leader of the free world. He will, however, be the leader of the global right wing. Across Europe, the radical right is embracing the next US leader as one of their own. Donald Trump validates their ugly bigotry, racism and xenophobia. He is one of them. It's no accident that he's also warmly received by the radical right Netanyahu government in Israel.

In the Middle East, the strongman thugs who rule with iron fists in the post-Arab Spring era couldn't be happier.

He will be a bit of both but radically different, too, predicts Theodore Karasik, a senior adviser with the Washington-based Gulf State Analytics, who has discussed the future of the region with Trump’s advisers in recent months. Trump’s chief priority, he said, will be to fight the Islamic State, while outsourcing the rest of the region’s security to Russia and to Arab states.

Words like “moderate” and “democracy” won’t feature in a Trump administration’s Middle East vocabulary, he added. “We are now engaged in realpolitik.”

For the region’s strongmen, most of whom had fraught relations with the Obama administration, that is welcome news. Turkey’s President Recep Tayyep Erdogan and Egypt’s President Abdel Fatah al-Sissi have hailed Trump’s election as a chance to reset their badly frayed relationships with Washington.

Hold onto your hats. With ideology this rancid driving AmeriKa's foreign and military policy, we could be in for a very sharp and wild ride.
Posted by The Mound of Sound at 12:13 PM

Angry old men who have problems with the whole world including themselves.
These people have spent so long on the sidelines hating people they can't vent their frustrations fast enough.
How long to self destruct?

Thanks for the link. It was interesting if not surprising. I touched on this a couple of days back when I wrote of a looming Republican "night of the long knives." The more I learn of Steve Bannon the more I think something along those lines awaits any thought "unreliable" by Trump's handlers.

Your use of the term AmeriKa is unfortunate, implying, as it does, that German=Nazi though it no longer does, for now. I think progressives would be better to lead by example these days with reason and leaving the insults to the bigoted right,

We've been here before, Mound. Unfortunately, we have learned absolutely nothing.

We live in a world Mound where sound bites and scripture have replaced political ideas. A world where a president elect and his high level political appointees can openly utter racist, bigotted remarks and not be challenged.

A world where these same political thugs can also openly threaten countries like Iran with violence if they don't follow Washingtons/Israeli orders of regime change. They must also allow the global imperialist neoliberals to control their wealth and they must do this without any resistance or dissent.

The US states this openly without challenge from the MSM, the American public or the US's allies, who now willingly share in the violence and plunder.

We live in an age, particularly in the US, of culture and death. Let us not forget that our government has tied its foreign policy to a failing imperial empire governed by faith and force, where anti-intellectual reigns supreme.

Canada's own sovereign destruction will be mainly as a result of our governments sychophantic allegiance to this ignorant, violent entity called America and we will also be responsible for all of the innocent lives lost because of our support of this killing machine.