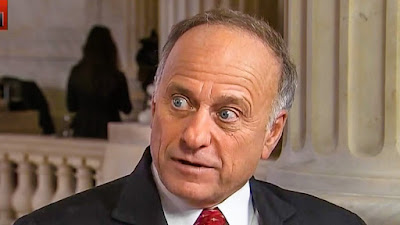 Republican congressman, Iowa's Steve King, thinks there are vestiges of rape and incest in all of us and, face it, we might not even be here today without it. To hear King tell it, rape and incest are getting a bad rap.


Explaining his opposition to abortion even in cases of rape or incest, the Iowa Republican told a local conservative group, “What if we went back through all the family trees and just pulled out anyone who was a product of rape or incest? Would there be any population of the world left if we did that?”

King added, “Considering all the wars and all the rapes and pillages that happened throughout all these different nations, I know that I can’t say that I was not a part of a product of that.”

The nine-term congressman was stripped of his committee assignments earlier this year after he told the New York Times that he didn’t understand how terms like “white nationalist, white supremacist, Western civilization” had “become offensive.”


King also said it would be wrong to abort a fetus that was conceived through rape or incest because it would be punishing the baby for “the sin of the father, or of the mother.”

King also told the audience that he’s been happy that President Donald Trump has been one of the few Republicans who did not castigate him for racist comments he made earlier this year in which he wondered why “white nationalist” and “white supremacist” were offensive terms.

People love to talk about how virtuous their values are while they live in a world of evil and corruption and don't lift a finger to do anything about it – whether they're in opposition or in power. They always manage to come up with 'more important' priorities: their own self-interest!

'“Lo! there ye stand, my children,” said the figure, in a deep and solemn tone, almost sad, with its despairing awfulness, as if his once angelic nature could yet mourn for our miserable race. “Depending upon one another's hearts, ye had still hoped that virtue were not all a dream! Now are ye undeceived! — Evil is the nature of mankind. Evil must be your only happiness. Welcome, again, my children, to the communion of your race!”

'“Welcome!” repeated the fiend-worshippers, in one cry of despair and triumph.' – Hawthorne


I don't see the correlation between veganism and indifference to our fellow man. Have you got anything at all to back that up or are you trying to create some false equivalence?

I do agree that the left, shorn of nearly every vestige of progressivism, becomes a slightly nicer version of the right but, then again, I've done quite a bit of reading on progressivism. Most on the left haven't and that comes through. It's not supposed to be a 'feel good' experience but the application of some pretty clear principles focused on strengthening the individual so that he/she can help build a better nation.