Justin Says "I Take Responsibility" ...But 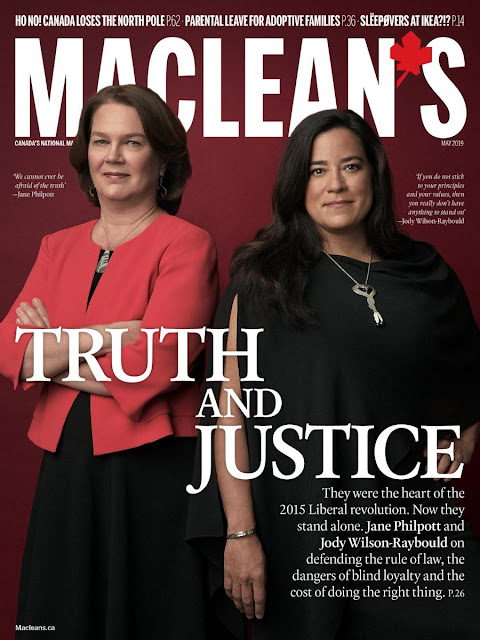 So he broke the law, so what? He won't apologize for standing up for Canadian jobs.

"We recognize the way that this happened shouldn't have happened. I take responsibility for the mistakes that I made," Trudeau said.

Does that mean that Justin takes responsibility for turfing Wilson-Raybould and Jane Philpott from the Liberal caucus for standing up to him? Maybe, but probably not. That would be expecting too much of the Dauphin.

Then comes the "but" as in 'I take responsibility but not really.'


"My job as prime minister is to stand up for Canadians and defend their interests. Yes, it is essential that we do that in a way that defends our institutions and upholds prosecutorial independence but we need to talk about the impacts on Canadians right across the country of decisions being made," Trudeau said. "I can't apologize for standing up for Canadian jobs."


The ethics commissioner said his review of the SNC-Lavalin affair turned up other "troubling tactics" and behaviour by some of the country's most senior public office-holders — including an inappropriate consideration of partisan political interests when discussing whether to proceed with a criminal trial.

Dion said discussions between Trudeau, former privy council clerk Michael Wernick, his senior staff and Wilson-Raybould about a political fallout in Quebec if the federal government did not reach a DPA with the company was "improper."

During a Sept. 17, 2018, meeting about the legal matter, Trudeau reminded Wilson-Raybould that he was "an MP in Quebec — the member for Papineau," a statement Dion interpreted as an attempt by the prime minister to remind his minister about the "larger political repercussions in Quebec, both for the federal and provincial orders of government."

He said further talk of the 2019 federal election was evidence that Wilson-Raybould felt considerable pressure from the prime minister to reach a conclusion favourable to the "governing party," the Liberal Party of Canada.

It's typical of this prime minister that he shows no genuine contrition for trying to meddle in a criminal prosecution to further his party and its political fortunes. That's Harper-grade shit and nothing less.
Posted by The Mound of Sound at 1:27 PM

But the Trudeau acolytes are still insisting it is a fake scandal and that Harper was much worse. Doesn't say much about either the state of our democracy or the thinking ability of extreme partisans, eh?


Isn't it great when Liberals have to use Harper as a yardstick for their own leader? Harper was truly bereft of principle but Justin isn't far off that mark.

I just love to hear that familiar "but, but, we're no worse than anybody else" refrain when these people get caught in a pile of their own 'ca ca' as my French mother-in-law used to describe an ordinary pile of shite.

Any decent and honourable leader would resign. Period. But JT is demonstrably neither decent nor honourable.

He's violated a section of the Conflict of Interest Act. And you might as well chuck in Butts and that bighead Chief Simple Servant whatsisname as well, now retired on a phat pension I personally begrudge as a taxpayer. Good thing JWR recorded her phone call with that unethical supposedly "nonpartisan" twit who was worried at Trudeau's reaction if JWR didn' capitulate on a DPA for SNC-L.

Where now is Trudeau's sacred "Rule of Law" repeated over and over again re the detention of the Huawei executive at Trumpian behest?

A Trudeau "I accept responsibility" is about as all encompassingly useless as a Trudeau "apology". Worth bugger all to anybody and any thing. The First Nations in particular should throw out all his fake apologies.

The man has no honour. So he delivers the country up to the alt-right CPC dogs, and we get to take it on the chin from those cave-dwellers next.

Canada has been betrayed.

Simon will be dreaming up fantasy bullshit about Twinkletoes, even as we mourn having in effect a criminal in charge of the country. The Aga Khan vacation, wandering around like a loony in costume in India, all a big selfie show. And he and Freeland are at the heart of buggering Venezuela by lies and sanctions for the Canadian mining industry. I have zero respect for either of them and disliked Freeland from the start.

Screw all this LibCon horseshit and Singh getting his fellow Sikhs to buy memberships so as to instal him as NDP leader, where he has been a damp squib. Vote Green.

I'm surprised Trudeau took any responsibility at all. I was expecting a "this is a learning moment for all Canadians..."


Lulymay, the Libs have been playing the "he's not as bad as Scheer" card so long it's getting thin. Of course JT isn't Scheer but neither am I. There you are, this October vote Mound. I'll be even less like Scheer than Trudeau! I promise!


BM, we've had a crash course in how to go from 'bright and shiny' to 'dull and dented' in one term in office.

After Harper we all wanted someone so much better, somebody really progressive, which is essentially what Trudeau's election platform made him out to be. We gave him just under two out of five votes, a lot of those 'anyone but Harper' votes that were going to whomever seemed most likely to take down Harper. That translated into enough seats to create another 'false majority.'

Then, with that win in his pocket, he wasted little time jettisoning the progressive stuff as though all those election commitments had no binding force on Trudeau's 'royal prerogative.'

Now, by virtue of one broken campaign promise, we have to fear yet another possible majority, this time by Scheer. The Libs are belittling anyone who won't go for another round of strategic voting when their leader created the mess by breaking his promise. There was a time that sort of thing had consequences. Now, it seems, they find us churlish if we expect them to keep their word.


BM, I hope it doesn't come to anything but the RCMP disclosed yesterday that they're looking into the SNC-L business.

The ethics commissioner was only looking at the Conflict of Interest Act. It was a pretty straightforward call.

It's hard to grasp an RCMP investigation that wasn't focused on something in the nature of attempted obstruction or perversion of justice.

The RCMP has a sullied track record when it comes to the Liberals and Parliament generally. The clearest case was then commissioner Zaccardeli and the Sponsorship Scandal that he manipulated to throw the election to Harper.

Post-Zaccardeli there was the 'immaculate bribe' business where they tried to throw the book at Duffy with more than 30 charges only to see every last one of them dismissed at trial. They fashioned a novel offence specifically to hammer Duffy while taking Harper, Nigel Wright and the PMO off the hook.

Zaccardeli refused to answer MPs questions about his dodgy meddling and no one has ever held the RCMP or commissioner Bob Paulson to account for what was a blatant political persecution, an attempt to make Harper's problems go away.

The smear job they ran on Ralph Goodale to defeat the Martin government and the Harper/Wright/Duffy affair completely undermined any confidence I will ever have in the integrity of the RCMP when it comes to federal parties and politics.